We spent another night in Phnom Penh, this time between our travels from Takeo to Siem Reap.

The first thing we did when we got back to Phnom Penh was visit the Genocide Museum. The site was originally a primary school and high school, but during the inhumane regime of the Khmer Rouge, it became a place for detention, interrogation, torture and killing. After the regime ended in 1979, the site was converted to a museum, as evidence of the horrific events that took place during the Khmer Rouge. And with hopes that by creating the public display, such crimes would be prevented from ever being committed again. It’s a sobering site; buildings full of tiny cells, interrogation rooms with torture devices, walls and walls lined with pictures and stories of the lives of those who suffered here. 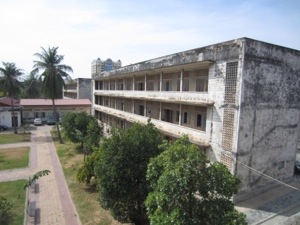 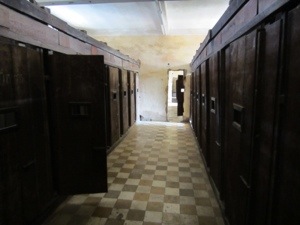 Before traveling to Cambodia, I knew vaguely knew about the country’s turbulent past. But being here as well as reading a detailed book about the country’s history during our time here has given me a greater understanding. There are still a number of buildings here that are ridden with bullet holes and we’ve come across far too many people who have lost limbs to land mines. It’s mind boggling to me all that has happened in this country in just the last 40 years. Although the genocide is over and the wars have ended, the country still suffers from government corruption, poverty, malnutrition, poor health care, and lack of education. It is disheartening to see; there is so much need here.

Later that day, we went to the Royal Palace, where people are still coming to mourn the death of King Sihanouk, who died three months ago. In Cambodia, white not black, is the color people wear when mourning. We saw groups of people clothed in white mourning on the Royal Palace lawn.

During our time in the city, we also went to the Russian Market and the Night Market. We did a whole lot of looking, but no buying. The prices were so low, we were tempted to buy some new clothes, but decided to hold off for now. 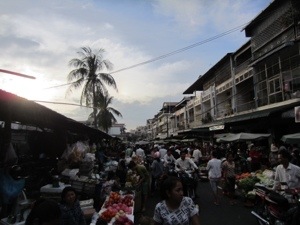 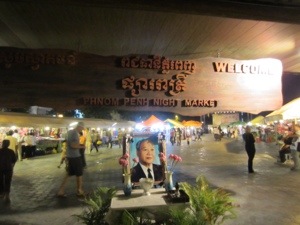 The next day was a Sunday and we had the opportunity to go to Ted and Sou Olbrich’s Gospel Church in Phnom Penh (our friend Emil’s parents). After a month of being in Asia and surrounded by Buddhism, it was so encouraging to meet and worship with Christians. The service was entirely in Khmer, but Ted had someone who was able to translate sit between Jay and I. Although I couldn’t understand the Khmer, the spirit of God in that place was undeniable and there were two words I heard again and again that I did understand – amen and hallelujah. And I even knew one of the songs we sang (We Bring the Sacrifice of Praise) although I almost didn’t recognize it with it being sung in Khmer. Ted told us that several of those leading worship used to be orphans. 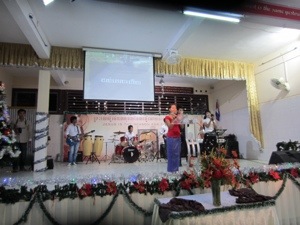 In addition to attending the service, we also had the opportunity to see some of the good work FCOP is doing in Cambodia. They have 100+ church orphan homes across Cambodia – where services are held on Sundays and children are taken in and cared for, typically by widows who live there with the children. Each home is run as a family with everyone taking part. In addition to providing care for the orphans, they train the orphans in all sorts of trades – sewing, IT skills, vehicle maintenance, building maintenance, etc. And as the orphans get older, they help them obtain jobs, using skills they have learned. The church we attended is where it all started back in the early 90’s. We were fortunate to be there on a day when the orphan children performed a traditional Cambodia dance. Who would have thought that we would have one of our most traditional experiences of Cambodian culture in a Christian church? It was lovely. 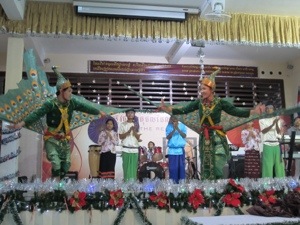