We took a high-speed train from Barcelona to Paris, which is a fantastic way to travel in Europe. It’s faster than going by road, less hassle than flying, and comes with lots of leg room. 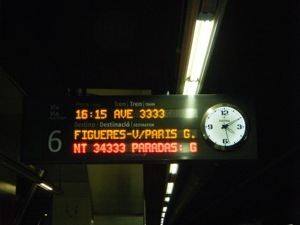 Waiting for the train

We were on the 4:15pm train out of Barcelona; by the time we arrived in Paris it was about 10:00pm, extremely cold, and snowing. It was a brutal awakening that I would probably be cold the remainder of our trip. But that is what we get for going to Europe in the winter!

There are so many things to see and do in Paris. We had made it through our travels up until to this point without purchasing any guidebooks (mainly because we didn’t want to haul around a bunch of books for all of the different places we were going). For Paris, we purchased the Lonely Planet Pocket Guide, which was perfect because it downloaded to the Kindle app on our iPhones that we carried around with us. We used that guide to navigate through Paris. Here are the highlights of the sites we saw in The City of Light:

THE LOUVRE: The world’s largest museum with over 35,000 works displayed. The night before, I downloaded the museum’s audio guide app to my phone. It was extremely helpful in navigating the labyrinth that is the Louvre, and oh so much better than toting around one of those clunky audio guides you typically get at a museum.

We spent about half a day at the museum. We saw most of the “must-sees”, including The Venus de Milo, The Victory of Samothrace, The Raft of the Medusa, The Wedding Feast at Cana, and, of course, the Mona Lisa. You know you’re in the Mona Lisa room when you see a large crowd of people huddled around a small painting. Most of the artwork in Lourve you can get quite close to, but the Mona Lisa sits in a climate-controlled enclosure behind a wooden railing and bulletproof glass. 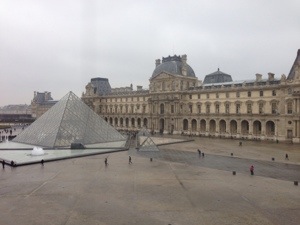 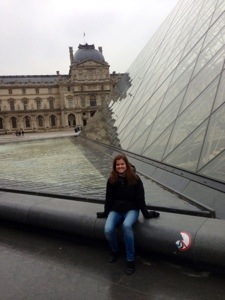 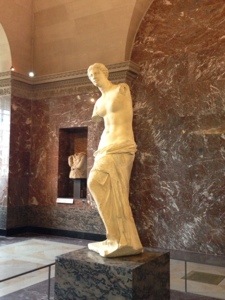 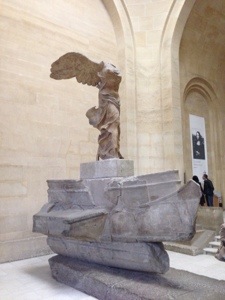 The Victory of Samothrace 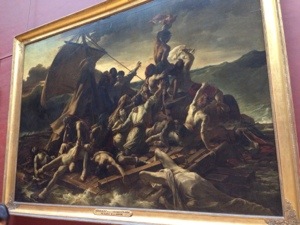 The Raft of the Medusa

In the Mona Lisa room

ARC DE TRIOMPHE DU CARROUSEL: The smaller arch built by Napoleon at the same time as the larger, more famous Arc de Triomphe on the Champs-Elysses.

THE SIENE RIVER: The infamous river that runs through the heart of Paris. By this point in our trip, Jay was getting tired of posing for pictures but didn’t mind taking them, so there are a lot of pictures of me. 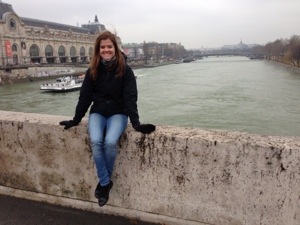 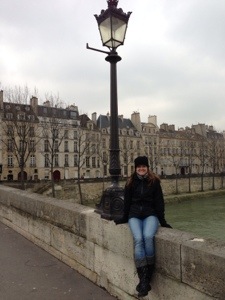 LOVE LOCKS: Padlocks attached to a bridge by couples that throw the key into the Seine River as a symbol of eternal love.

PERE LACHAISE: The world’s most visited cemetery. Its cobblestone lanes and elaborate tombs reminded us of La Recoleta Cemetery in Buenos Aires. 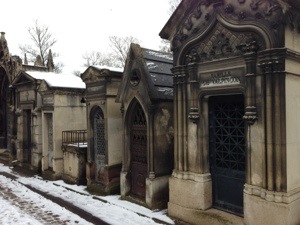 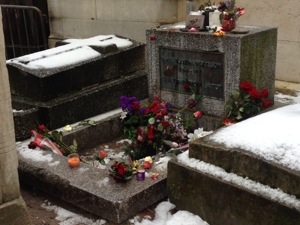 MAISON DE VICTOR HUGO: The former home of Victor Hugo. He wrote much of Les Misérables while lively here (which, fittingly, is the book I was reading while we were in Paris). 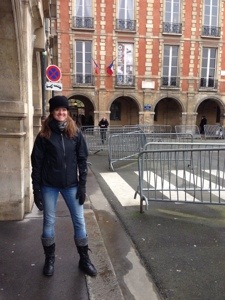 In front of the Maison de Victor Hugo 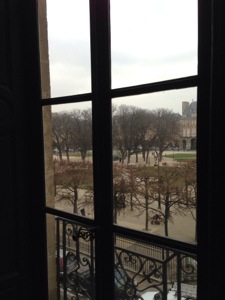 A nice park view from inside his home

NOTRE DAME: The historic Roman Catholic Cathedral. Construction on the cathedral began in the late 1100’s and wasn’t finished until 1345. It was severely damaged during the French Revolution. According to our Lonely Planet guide, it was destined for demolition until Hugo’s 1831 novel “The Hunchback of Notre Dame” became widely popular, sparking a petition to save it. Outside the front steps of Notre Dame is Point Zero, the point from which all distances in Paris are measured. 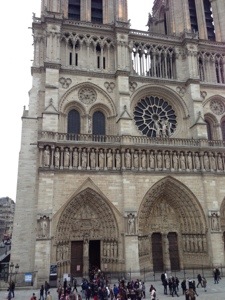 ARC DE TRIOMPHE: Built as a monument to Napoleon’s 1805 victory at Austerlitz. It sits in the middle of the world’s largest roundabout (thankfully there is an underground walkway to get there so we didn’t have to play Frogger with traffic). We took the 284 steps up the arch to the terrace on top where we enjoyed beautiful panoramic views of the city. Under the arch is The Tomb of the Unknown Soldier with an eternal flame, which honors the 1.3 million French soldiers who lost their lives in WWI.

Climbing the stairs up to the top

Panoramic views from the top

Views of the Eiffel Tower

Posing with the Eiffel Tower 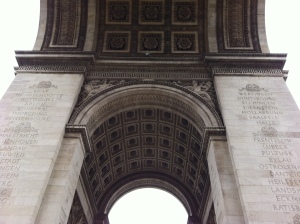 Standing under the arch

The Tomb of the Unknown Soldier

MONTMARTE: The city’s steepest quarter that was, and still is, a popular area for artists. Around the turn of the 20th century, it was home to famous artists such as Van Gogh and Picasso. Today, artists still create and sell their creations on the main square – the Place du Terte. 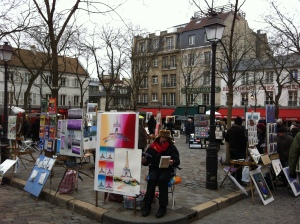 SACRE-COEUR: The basilica located at the summit of Montmarte, the highest point in Paris. While there, I sat back, enjoyed the views, and watched a talented street performer do some cool tricks with a soccer ball. 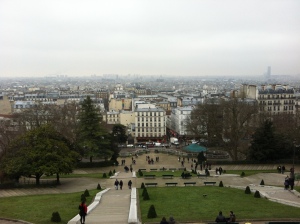 Views from the basilica steps

One of the best places in Paris to enjoy the views

Street Performer – the backdrop definitely adds to the performance

EIFFEL TOWER: The defining feature of the Paris skyline…made of 7000 tons of iron held together by 2.5 million rivets! In lieu of dealing with the lines and hassle of taking the elevator up, we chose to take the stairs. It’s 1665 stairs to get up the second platform. While standing on the Eiffel Tower, surrounded by panoramic views of Paris, I had one those moments where I felt like I needed to pinch myself to make sure it was real (one of many during our travels). Note to self…check the Eiffel Tower off the bucket list! 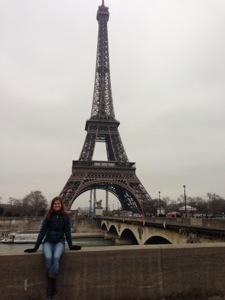 Making our way up the tower

View of Jardin des Tuileries and the Louvre 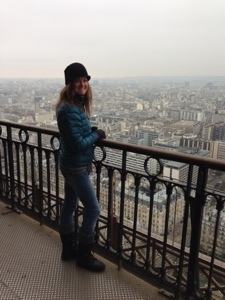 Taking in the view

View of the Siene River 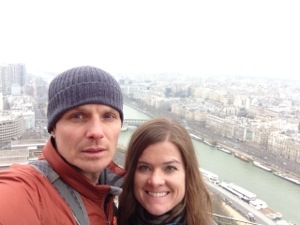 Us on the Eiffel Tower!

Peace Monument at the Eiffel Tower