The last stop on our journey this winter was Iceland. We ended up in Iceland because our best flight option from Europe back to the States was on Iceland Air and they allow you to do a stopover in Iceland at no extra charge. It was an opportunity we just couldn’t pass up.

The day we arrived in Iceland, my Aunt Marty asked for my first impression. I told her “it’s not as cold here as I thought it would be”. This was my first impression because when we walked out of the airport, I was pleasantly surprised to find that the weather was warmer in Iceland than it had been in Paris. Little did I know that about 48 hours later, the weather would take a dramatic turn for the worse.

To be honest, the name Iceland is a bit of a misnomer. Iceland is mostly green (compared to Greenland which is mostly ice). Only 12% of Iceland is covered in ice and 11% of the land is covered in lava. It’s probably because of the name Iceland that so many people are under the false impression that the country is covered with ice. To get people talking about how Iceland really is, this past year, a contest was held that asked people to share what Iceland means to them and to describe the country in one word. This led to a big misunderstanding. Word started spreading through news stories that Iceland was holding a contest to pick a new name for the country. Just to set the record straight – Iceland is not picking a new name for itself.

If I had to pick a name, it might be LostForWordsLand. The beauty of Iceland is so unbelievable, it’s hard to express in words. We got our first taste of the country’s beauty on the Golden Circle. The Golden Circle is Iceland’s most popular day tour; it consists of three main sites – Gullfoss (golden waterfall), Haukadalur Valley (the geysers), and Þingvellir (Thingvellir) National Park.

Our first stop was Gullfoss, Iceland’s most famous waterfall. It’s formed by the Hvitia river plunging down into a large crevice about 100 feet deep and 60 feet wide. 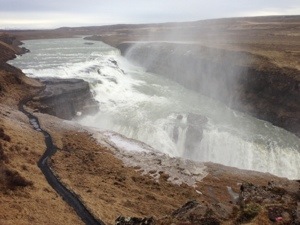 The scenery around Gullfoss 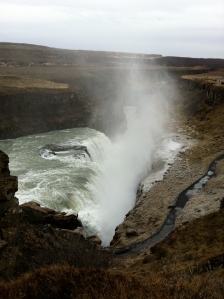 View of the Gullfoss crevice

Iceland is full of rugged terrain and pimped out 4×4’s seem to be the vehicle of choice – they are everywhere! Here are a few we saw in the Gullfoss parking lot.

After Gullfoss, we went to nearby Haukadalur Valley to see the geysers. The first thing you notice when arriving at the valley is all the steam. Geothermal heat is Iceland’s oil; it’s used to heat homes and provide electricity. The steam is so powerful that when it’s harnessed, they have to zig zag the pipes in order to slow down the steam’s flow. 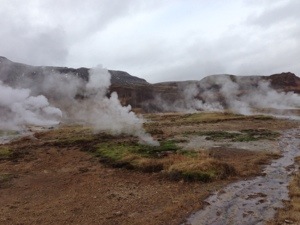 The biggest geysers of Haukadalur are Strokkur and Geysir (the one by which all others got their name). Geyser is the only Icelandic word used in the English language (and thank goodness for that because Icelandic words are often a mouthful). Geysir (aka The Great Geysir) doesn’t erupt much anymore. But Strokkur, on the hand, erupts every 5 to 10 minutes. I had never seen a geyser erupt before, so I was pretty excited to check it out. We walked straight there and anxiously waited for the explosion. 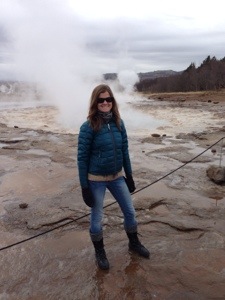 Waiting for Strokkur to erupt

The eruption did not disappoint. We were just standing there…anxiously awaiting, knowing it could happen at any moment. And then, all of a sudden, a big explosion. It literally took my breath away. Awe inspiring! To see what it was like, check out this video I took: http://youtu.be/DyO27Jxgfm8

After watching Strokkur erupt a number of times, we walked over to The Great Geysir. Although knowing it doesn’t erupt that often anymore, I was really hoping it would. No such luck. 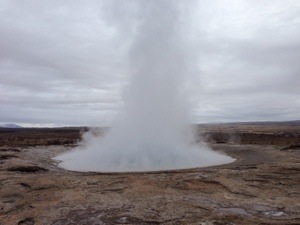 At Haukadalur, there is also Little Geysir. It is one of the many minor geysers in the area. It boils constantly. If you look closely in the picture, you can see the bubbles.

The Haukadalur Valley is sensory overload. The cold air, the warm earth, the pressurized water boiling to the surface and the sights and sounds it creates. It’s a fascinating place.

After seeing Haukadalur Valley, we headed to Thingvellir National Park. On our way there, we saw a big gap in the earth where tectonic plates are spreading apart. On one side is the North American plate and the other side the Eurasian plate. The gap between them is widening by about one inch per year.

The meeting of the plates

Thingvellir (pronounced THINK-velt-tier) means “Parliament Plains”. For hundreds of years, it was the site where chieftains from around Iceland would gather to debate and enact laws. Today, it’s a treasured National Park. For us, it was a beautiful end to our tour of the Golden Circle. 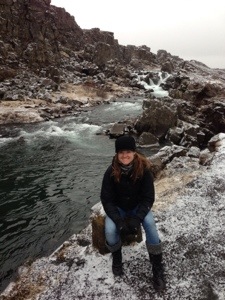 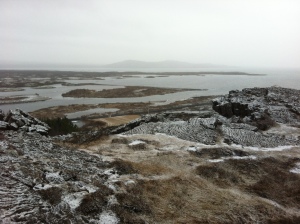 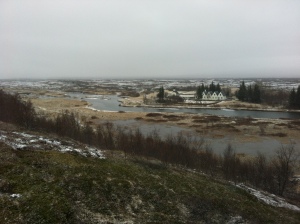 6 responses to “Iceland – The Golden Circle”