From Kyoto, it’s only about a 45-minute train ride to Osaka. After arriving in Osaka and getting a bite to eat, we headed to Osaka Bay. The bay area is full of new developments on man-made islands. We rode the Tempozan Giant Ferris Wheel to get a birds-eye view of the bay. From the top of the wheel, you get a sense of expansiveness of the bay. The wheel also provides nice views of the various bridges that connect the bay. 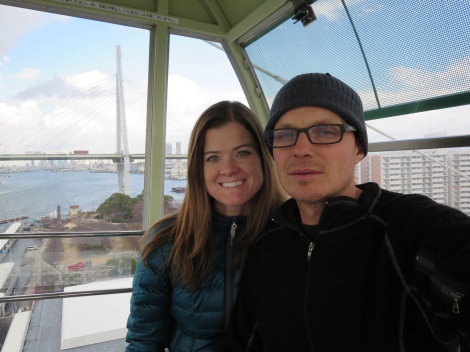 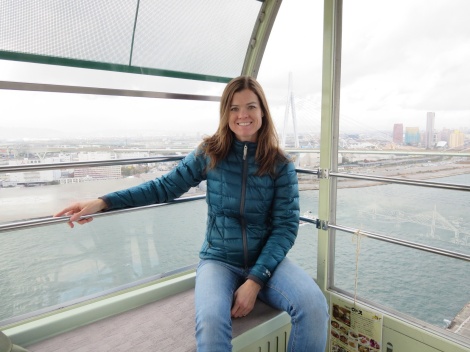 minato bridge, a double-deck bridge in the osaka bay

Next to the ferris wheel is the Osaka Aquarium, touted as one of the best in the world. We decided it was a must-see.

view of the aquarium from the ferris wheel

The aquarium is an 8-story building with enormous tanks that run from top to bottom, through all 8 floors. You start by taking an escalator all the way up to the 8th floor. You then tour the aquarium by winding your way down a ramp that circles all the way down to the first floor. As you make your way down the winding ramp, you are surrounded by continuous glass tanks. It’s fascinating because it simulates scuba diving…you start just above the water’s surface and make your way down to the deep sea. As you walk along each level, you move through different oceans/regions which each contain their own unique species. 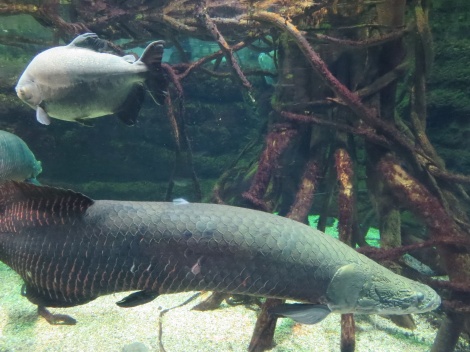 feeding time for the penguins

The stars of the aquarium are the two whale sharks. We were able to see them during feeding time. A man fully outfitted in diving gear actually got into the tank to feed them. 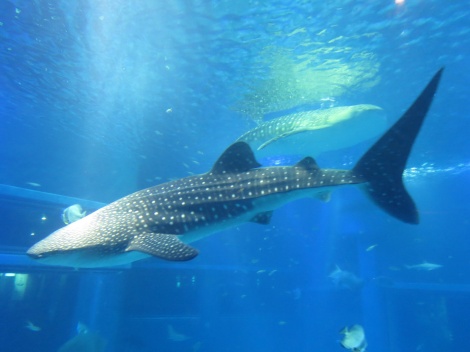 the thick acrylic glass used at the aquarium 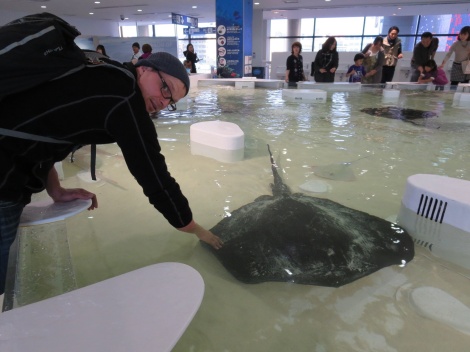 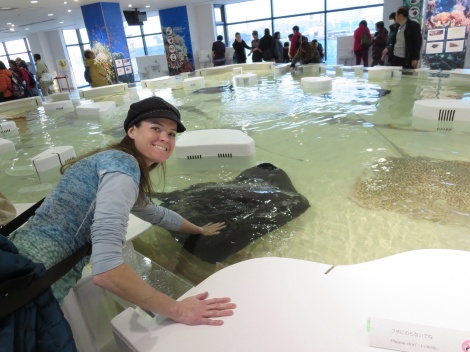 After leaving the aquarium, we stayed in the bay area to watch the sunset.

it was super windy 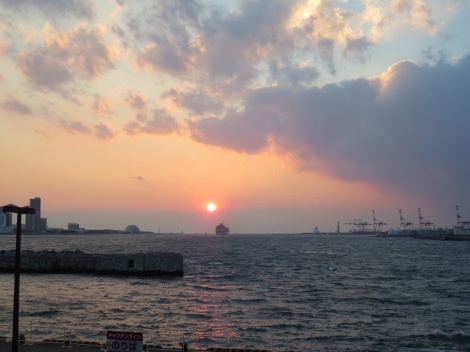 watching the sunset over osaka bay

After sunset, we headed to Namba (the south end of downtown Osaka). Herein lies Dotonbori, Osaka’s most famous district that glitters like Times Square. The landmark neon sign is the Glico runner crossing the finish line. I tried my best to impersonate. 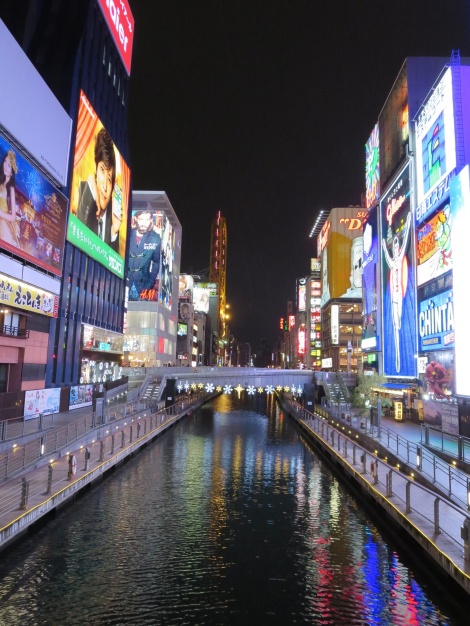 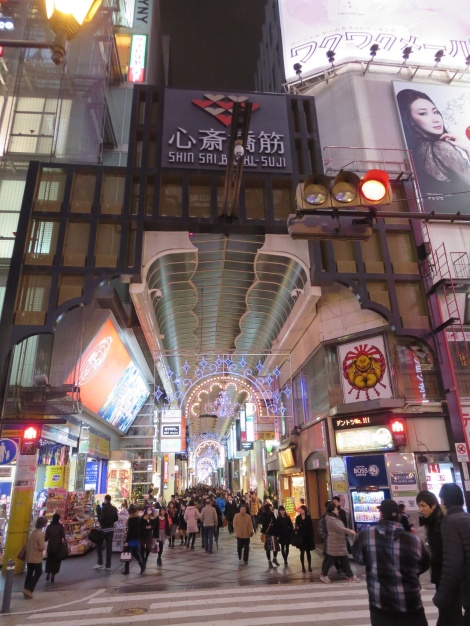 never a lack of places to shop in japan

For dinner that night, we headed to a sushi bar – literally, a restaurant with just one long bar – sushi chefs on one side and patrons on the other. You order sushi directly from the chefs. We noticed that most people would order one or two things at a time and keep on ordering until they had enough. Dealing with the language barrier, we decided to just order everything at once. Once you order, the chef places a flat plate with sliced ginger in front of each person. That plate is where he places the sushi as soon as he finishes making it. 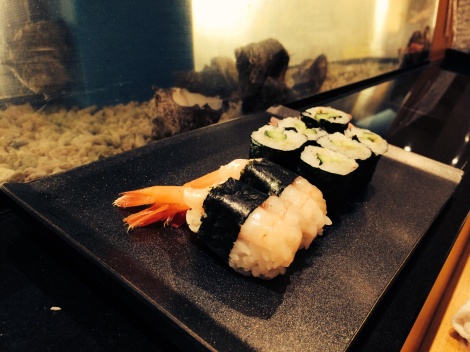 The sushi was the best tasting, freshest sushi we had ever had. And talk about fresh…we sat by the aquarium where chefs were pulling live creatures out of the tank as they worked. One important note…in Japan, they don’t give you the wasabi on the side – the chefs put it directly on the sushi. Which means the level of heat is at the discretion of the chef. I think our chef was having a little fun with us on our first set because it was so spicy my whole sinus track was instantly on fire. Even Jay’s eyes were watering and he likes his food super spicy. Thankfully, it was just that first set that was over the top hot. My personal favorites that night were the spicy tuna roll and the shrimp tempura roll. Nigiri and shishimi style are definitely more popular among the locals, but I prefer rolls. 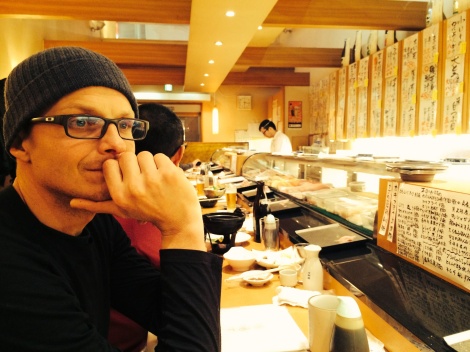 watching the chefs at work

In Osaka, we stayed in a “capsule” hotel. You literary sleep in an individual capsule. This style of accommodation was developed in Japan and has not gained popularity outside the country, making it a uniquely Japanese experience. The first capsule hotel to open was in 1979, in Osaka. Most capsule hotels are for men only, but there are some that have floors for women.

In Japan, it’s customary to remove your shoes when entering a home or hotel. Upon check-in at the capsule hotel, they give you a key which opens two lockers – one in the lobby for your shoes and a second one on your capsule floor. The locker on the capsule floor contains a robe, slippers, towel, and toothbrush with toothpaste (shared bathrooms & showers on each floor). I was on a secured women’s floor; Jay was two floors up on a men’s floor. Each person is assigned a capsule. It has just enough room for sleeping…a bit tight if you’re over 6 ft tall. There is a screen at the end of the capsule that you can pull down for privacy. Overall, it was a fun experience, but not that comfortable to sleep in, so I wouldn’t recommend it for more than one night. 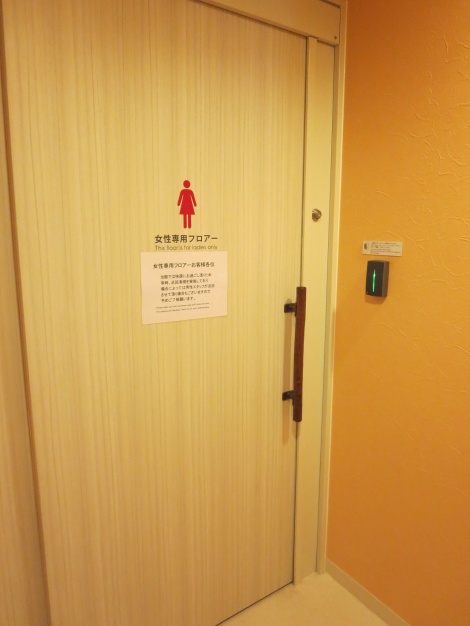 looking into the capsule 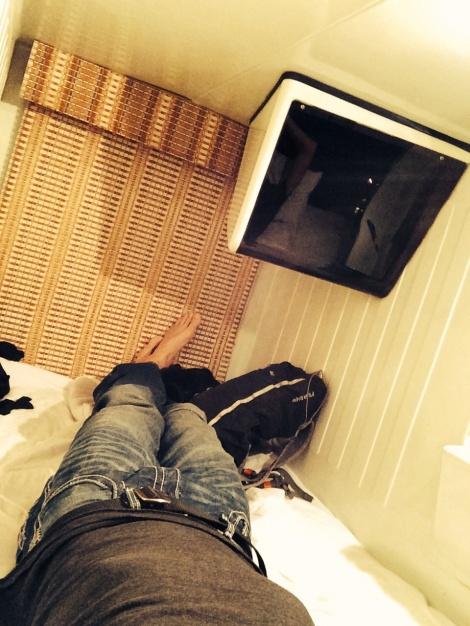