We ended our time in the Philippines in Manila, primarily because that’s where we needed to be to catch our flight out of the country. Before arriving in Manila, we had yet to meet anyone who spoke highly of the city. As we talked with different Filipinos and tourists we met during our travels, there seemed to be a general consensus that Manila was the least desirable destination among all the places we were visiting in the Philippines. As with many developing-world cities, the streets of Manila are congested with traffic, poverty is pervasive, littering is widespread, and the scent of urine permeates. We only had about 36 hours in the city, but that was enough for us. I do, however, fully acknowledge that our limited time here meant that our perceptions were based on first impressions.

The city of Manila is divided into 16 districts. We stayed in Ermita, which is right in the middle of the main tourists areas. We were two blocks off Roxas Boulevard, a long wide avenue that runs along the shores of Manila Bay. It’s lined with hotels, restaurants, commercial buildings, and parks. Our time in the city got off to a nice start. We enjoyed dinner at a Middle Eastern restaurant not far from our hotel (we liked it so much we went back the next day).

The following morning, we were able to get real coffee (definition: espresso). And, just as Jay & I were talking about how we would really like to find some bananas for breakfast…a man pedals by with this cart. 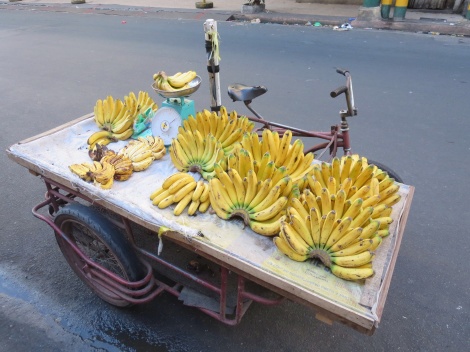 That day, we did our own little walking tour of Manila. We walked along Roxas Boulevard to Rizal Park. The park is named after national hero José Rizal, the leader who sparked the revolution against Spain.

Adjacent to Rizal Park is Intramuros (Latin: within the walls). The entire city of Manila used to lie within a relatively small area enclosed by stone walls over 6 meters high and more than 4 meters thick. The walled city was built by the Spaniards in the 16th century. Back then, only those of Spanish decent (and their servants) were allowed to live within the walls. Outside the walls lived Filipinos and Chinese merchants. The walls of the old city, and the fort built to protect it, have suffered damage over the years from various wars (most severely during WWII). Since WWII, a government initiative has restored not only the walls, but also a number of structures within the walls. The work continues today, preserving an important piece of Manila’s history. 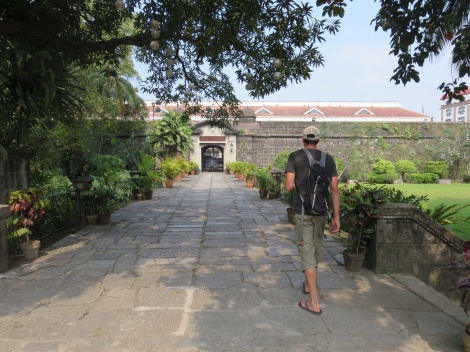 walking toward the old main gate 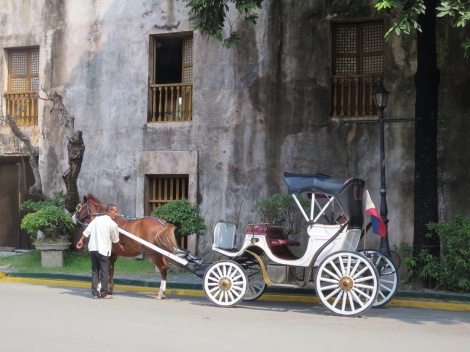 inside the walls, there is a spanish colonial feel 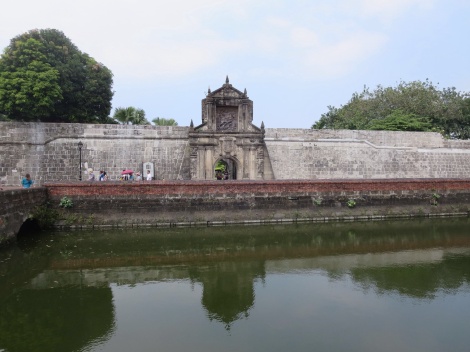 inside the fort, overlooking manila bay

the walls of fort santiago

walking along the fort walls

a view from above

José Rizal, the Philippines national hero, was imprisoned at Fort Santiago before his execution in 1896. Inside Rizal’s former prison cell stands a statue of him. Just outside the cell are bronze footsteps embedded on the ground which represent his final walk from the prison cell to the site of his execution.

In lieu of ending our blogs on the Philippines with the execution of the man largely considered the country’s greatest national hero, I’ll end on a lighter note…

Throughout our time in the Philippines, we couldn’t help but notice the popularity of 80’s music. As we traveled around, there were a handful of songs we heard over and over and over again. We heard them so many times, they became part of our experience. So, as we reflect back on our time in the Philippines, here’s the soundtrack that will be playing in the back of our minds.