We spent our last two days on the North Island in Wellington, New Zealand’s capital. (Also the birthplace of Peter Jackson, Director of The Lord of the Rings trilogy.) Wellington is notoriously windy due to the channelling effect of the Cook Straight. The place averages 173 days a year with winds over 60 kph (roughly 40 mph). It seems we hit the weather jackpot during our time in Wellington, as apparently the city only has a handful of days each year that are as nice as the two days we were there.

We spent our first day exploring the city. It was a Sunday, so the weekend markets were in full swing. We perused the stands and picked up a couple of bags of fresh fruits and veggies. We also spent some time just wandering the downtown streets. 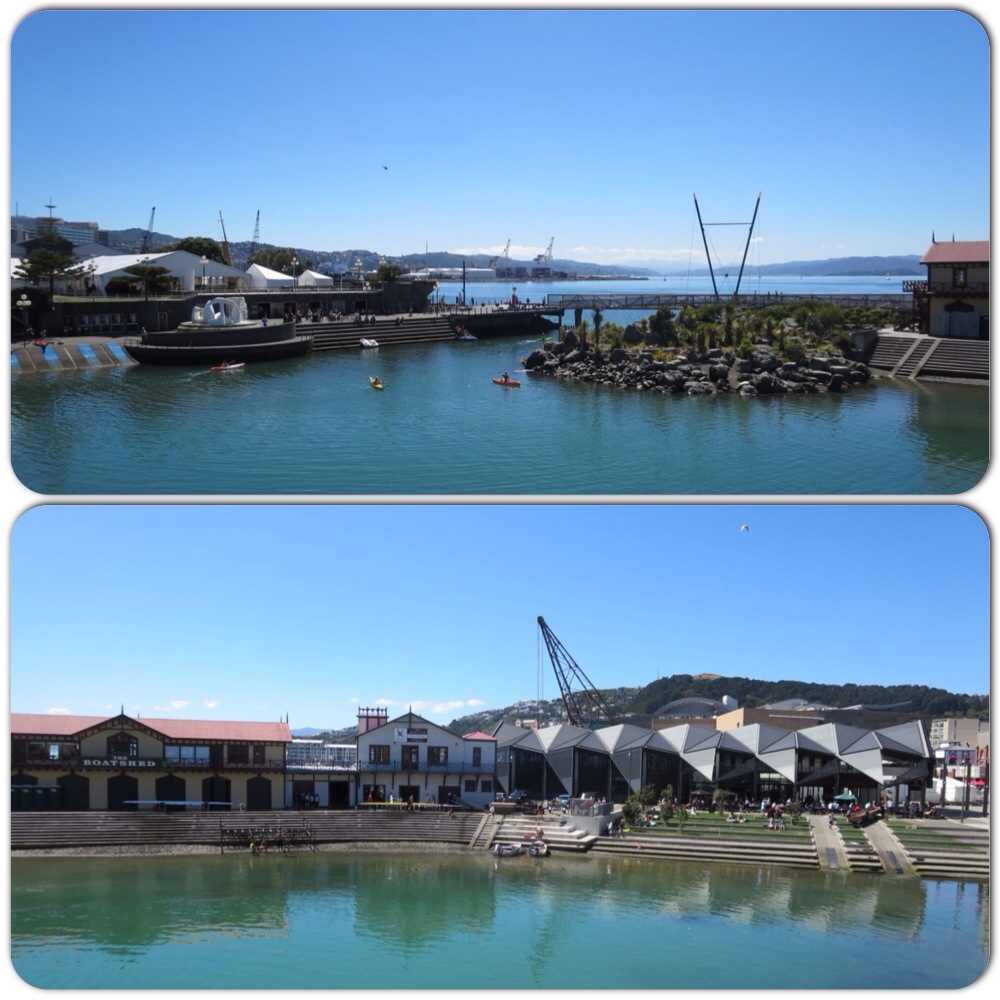 it’s a beautiful day in wellington 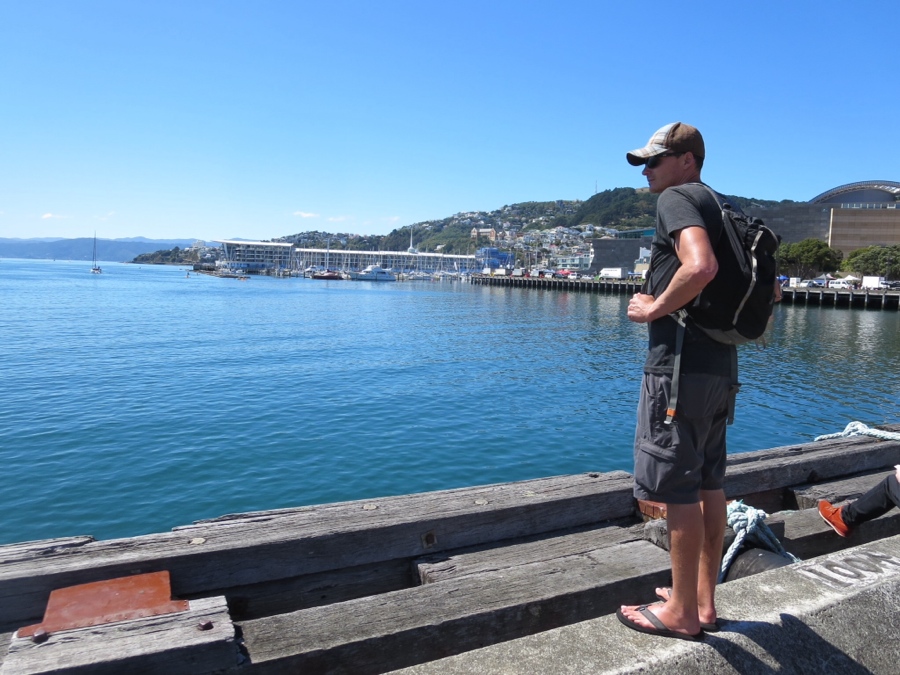 the large, tan building is the te papa museum and the market lines the adjacent waterfront 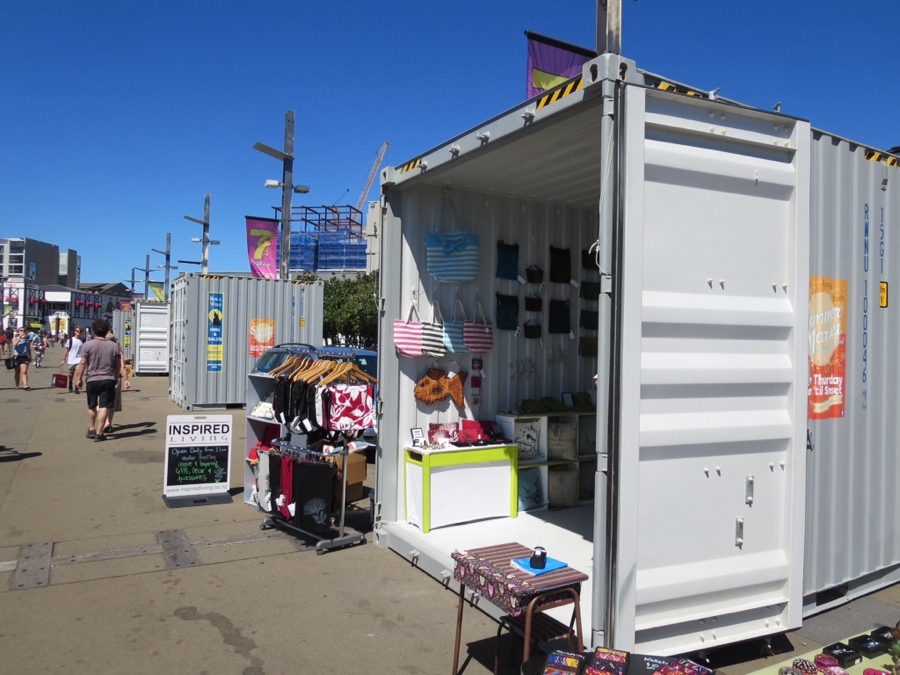 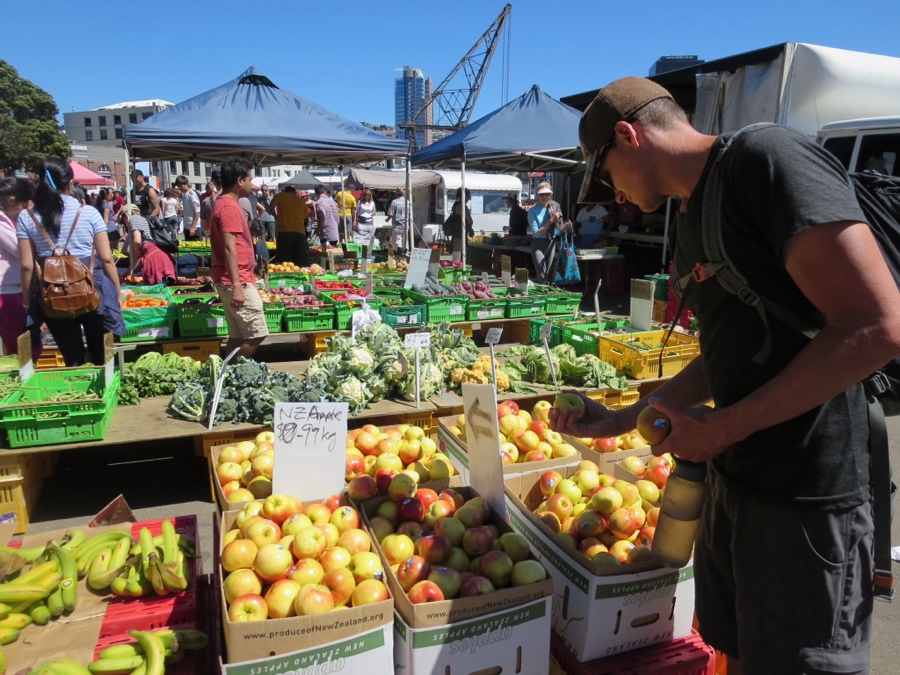 picking up some fresh produce 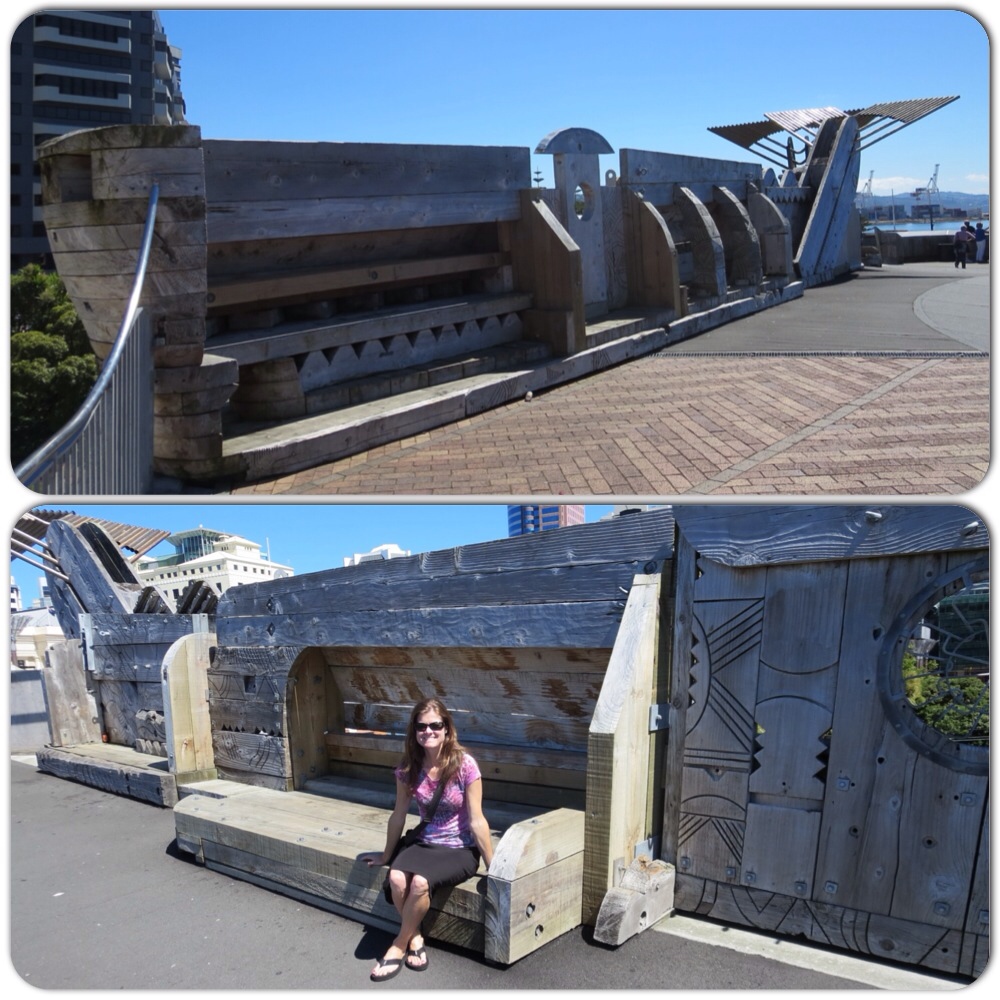 the artistic sea to city bridge

we checked out the art exhibitions at the city gallery

In the heart of downtown Wellington is the Te Papa Museum, New Zealand’s national museum. It’s a huge facility with six large floors filled with exhibits; no doubt you could spend a whole day there and not see everything. Having limited time, we decide to focus on the “natural environment” exhibitions. With all of the time we we spending outdoors in NZ, we were curious to learn more about the country’s diverse range of creatures and plants. And, we were interested in finding out more about the crazy weather occurrences here – from heavy rains & flooding to fault movements & earthquakes. It was all very interesting and we learned a lot. We were glad we spent some time at the museum (and no excuse not to since admission is free).

The Te Papa Museum is also where we parked the campervan during our stay. The museum allows overnight campervan parking in a designated area of their parking lot. Although not ideal, it’s conveniently located downtown (real campsites are 30+ minutes out) and the fee we paid supports the museum. 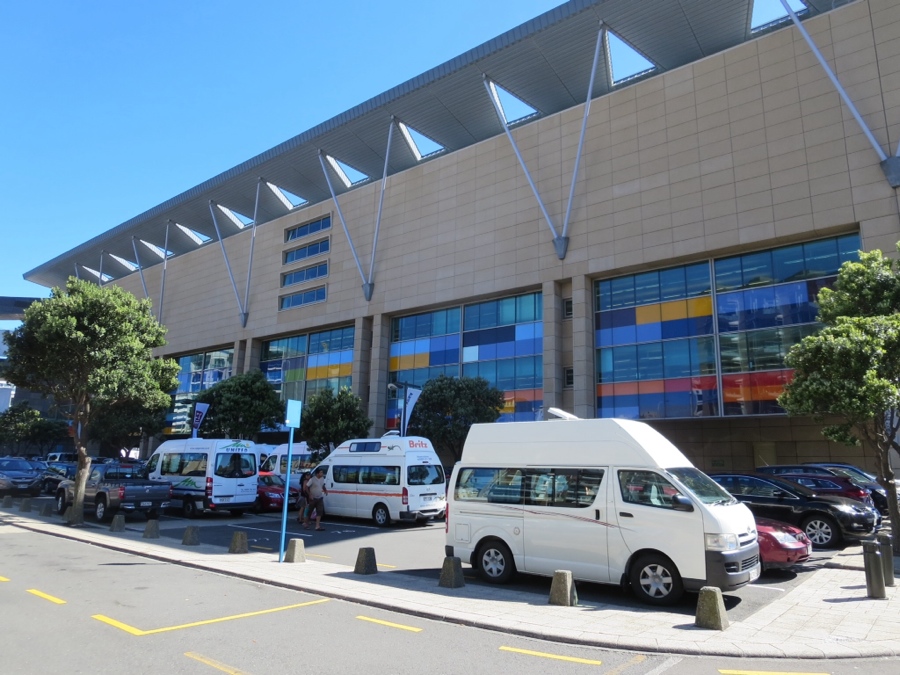 at the te papa museum

the illusive kiwi on display at the museum..we’re heard them but not yet seen one in the wild

After visiting the museum, we walked up Mt Victoria, which is located near the city center. It was a short, but steep ascent to the summit. The lookouts on top offer 360 degree views of the city and the opportunity to watch planes go in and out of the airport (which is cool to watch because the planes fly low over the bay and land on a small isthmus just east of the city).

making the ascent up mt victoria

after a short but leg burning ascent, we reach the lookout 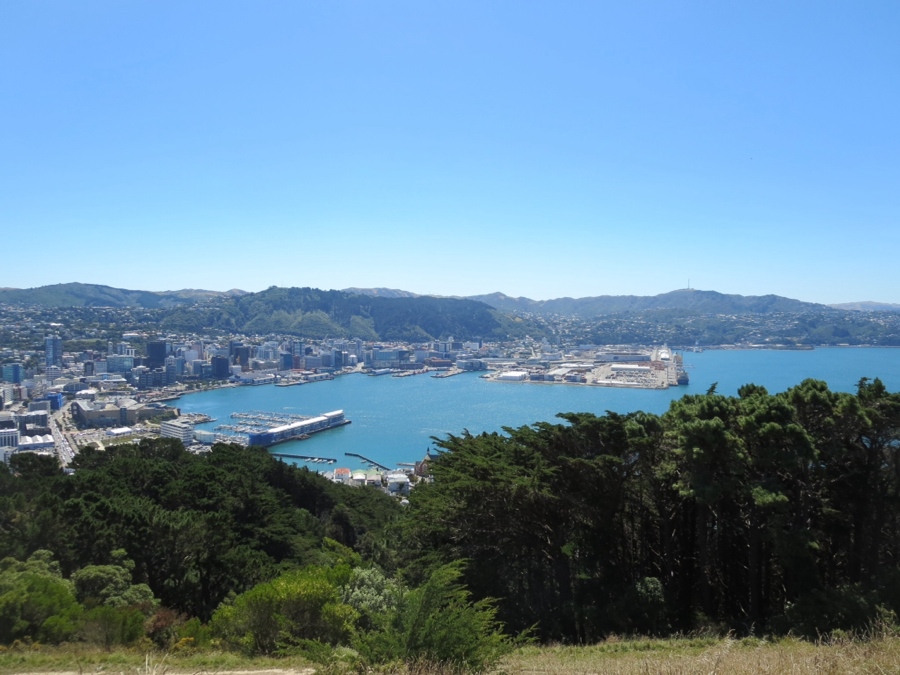 panoramic views of the city center below 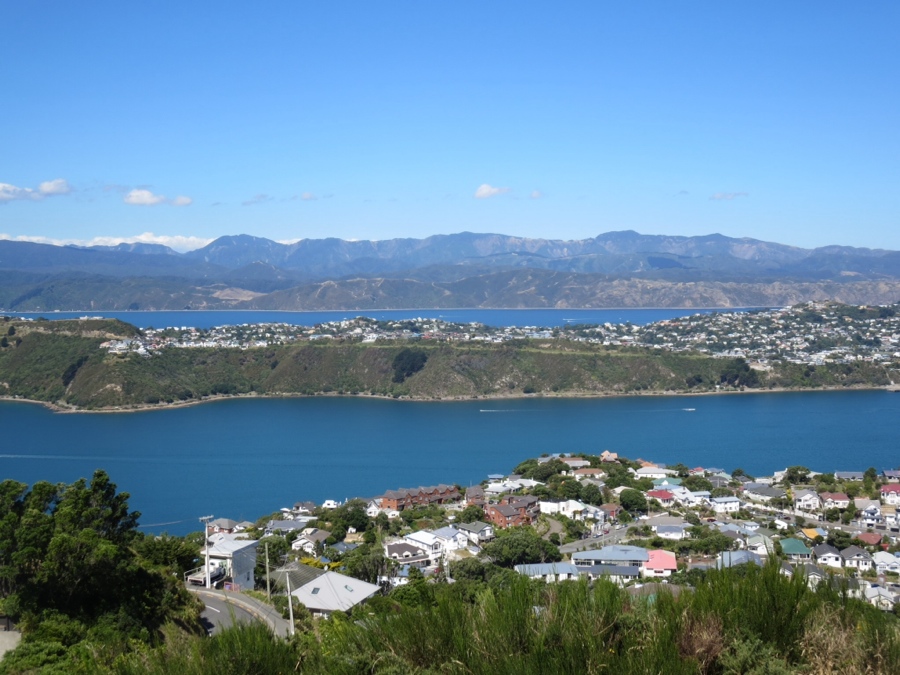 views of the akautangi/evans bay 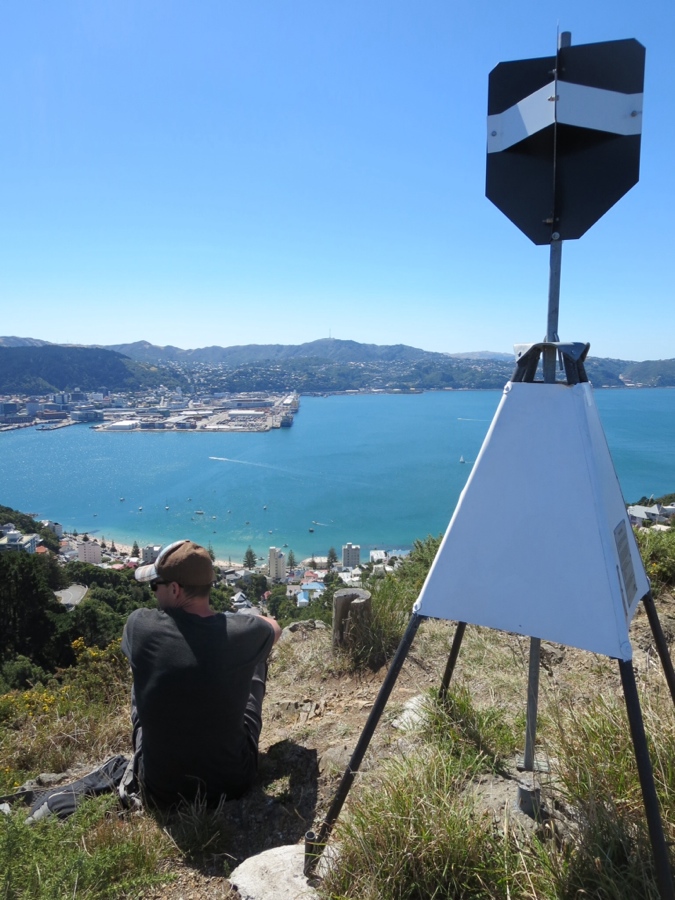 where we sat and watched the planes

watching planes land on the isthmus

After our short jaunt up the mountain, we decided to spend the late afternoon relaxing at the beach. 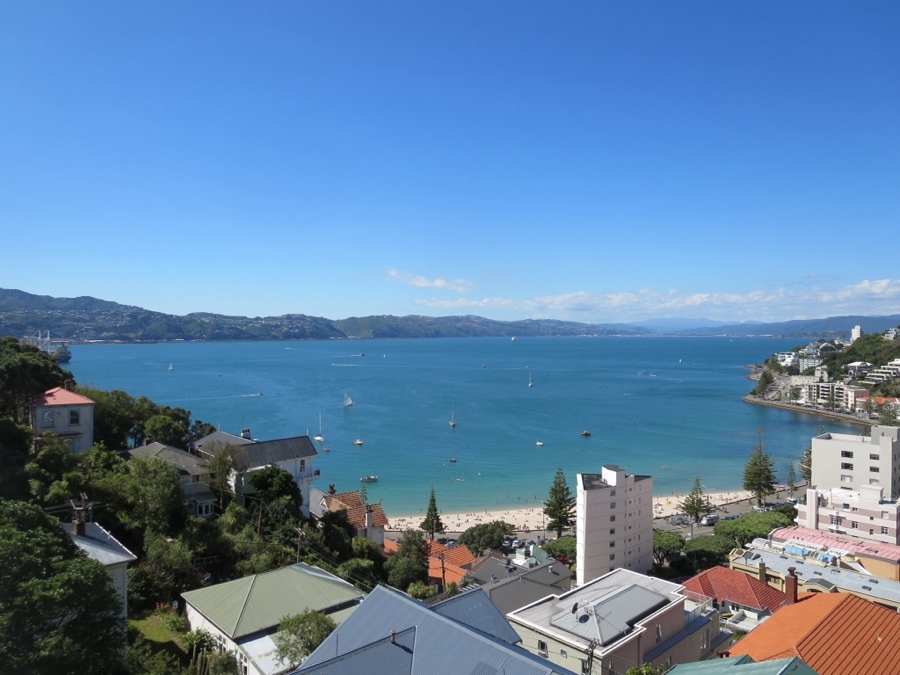 as we descend mt victoria, we can see the beach below 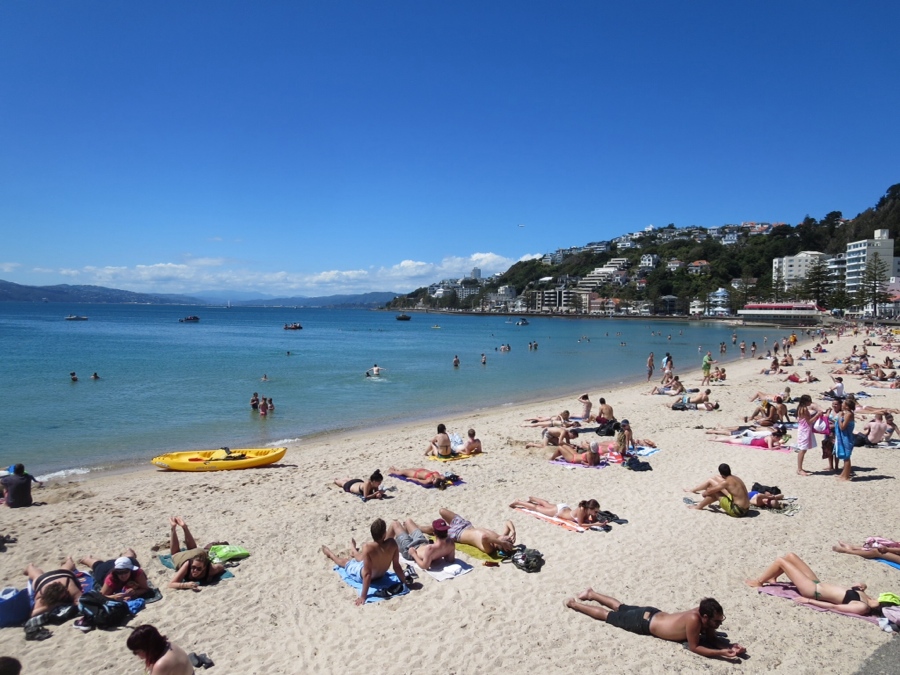 Next, we headed over to Wellington’s pedestrian mall – Cuba Street. In a small alley right off the mall is a cluster of ethic restaurants serving up good, lost cost meals. We had dinner at a small Asian restaurant called Satay Kingdom for less money than we could have made a meal for ourselves. It was a good day.

The following morning, we headed to the iRide bike shop. This shop has an exchange program with Wheat Ridge Cyclery in Denver. With opposite bike seasons, there is an opportunity for people who work at Wheat Ridge Cyclery to spend Colorado’s winter months working at this Wellington bike shop during NZ’s summer months. Originally, Jay had planned to ship his mountain bike here, but in the end, decided it was just too expensive and he would rent instead. So, our second day in Wellington, we headed to the iRide shop to rent bikes and meet up with Wayne (employee at Wheat Ridge Cyclery working in NZ). It was his day off, so he could ride with us for the day. Wayne was also nice enough to switch the bike brakes around for us (just like cars are built left hand drive in NZ, so are bikes).

We loaded up the bikes in the campervan and headed up to Makara Peak Mountain Bike Park. In 1998, the land was set aside for mountain biking and by 2012, more than 25 miles of single track had been built. The park has trails for all abilities, and all tracks eventually lead back to the same carpark (with nice facilities), so you can do different routes/laps. It’s a really nice set up. As an added bonus, the park offers nice views of the city and surrounding area. 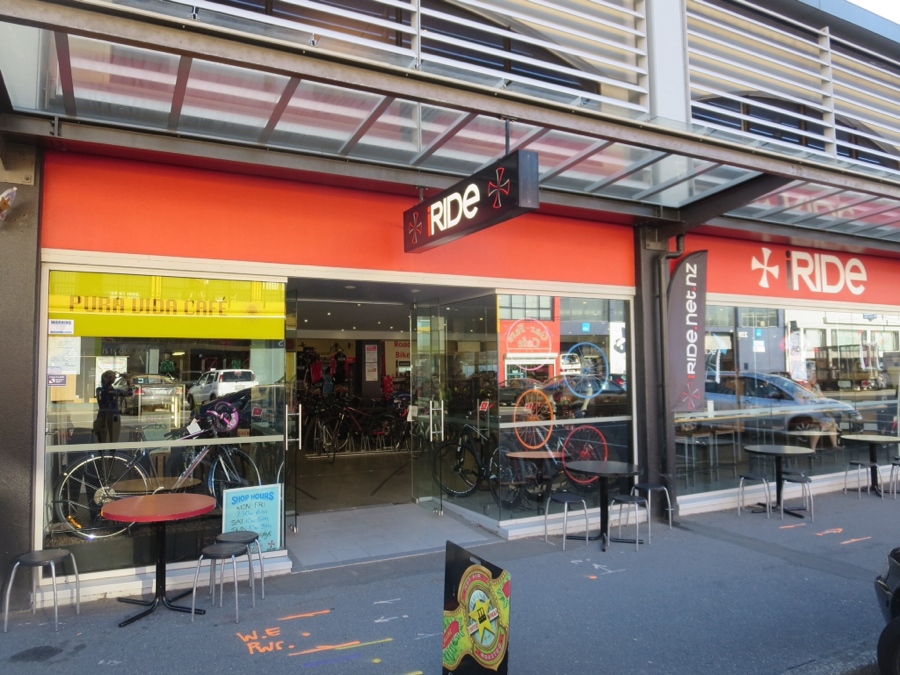 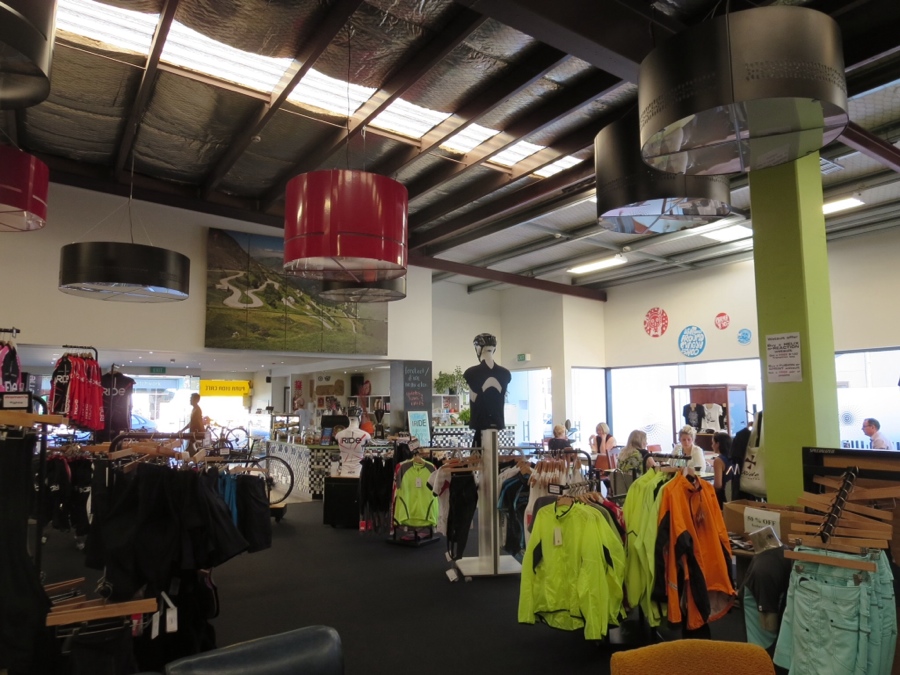 a really nice shop – even has its own cafe inside 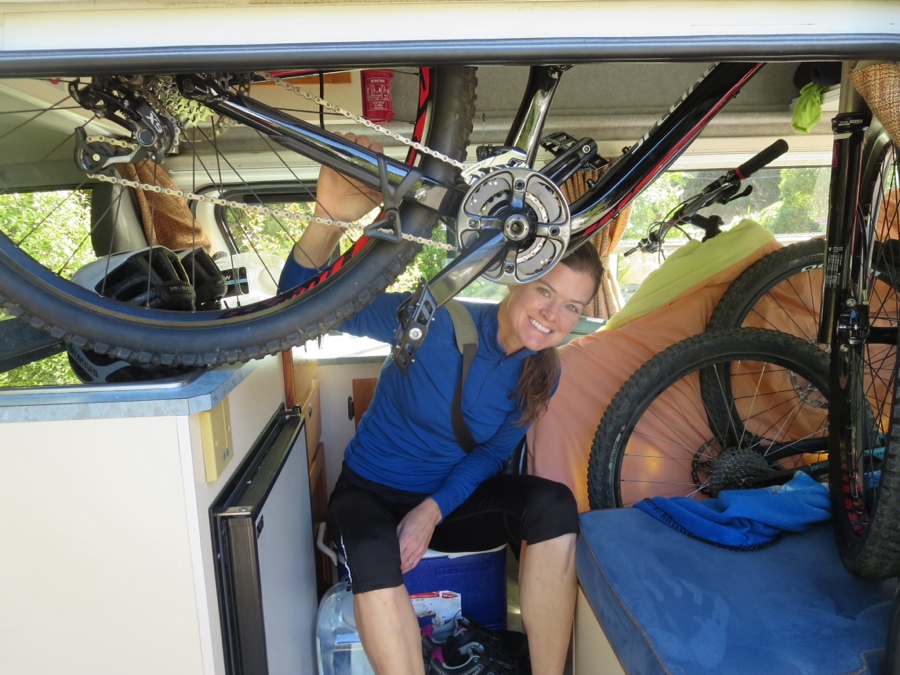 the bikes are loaded 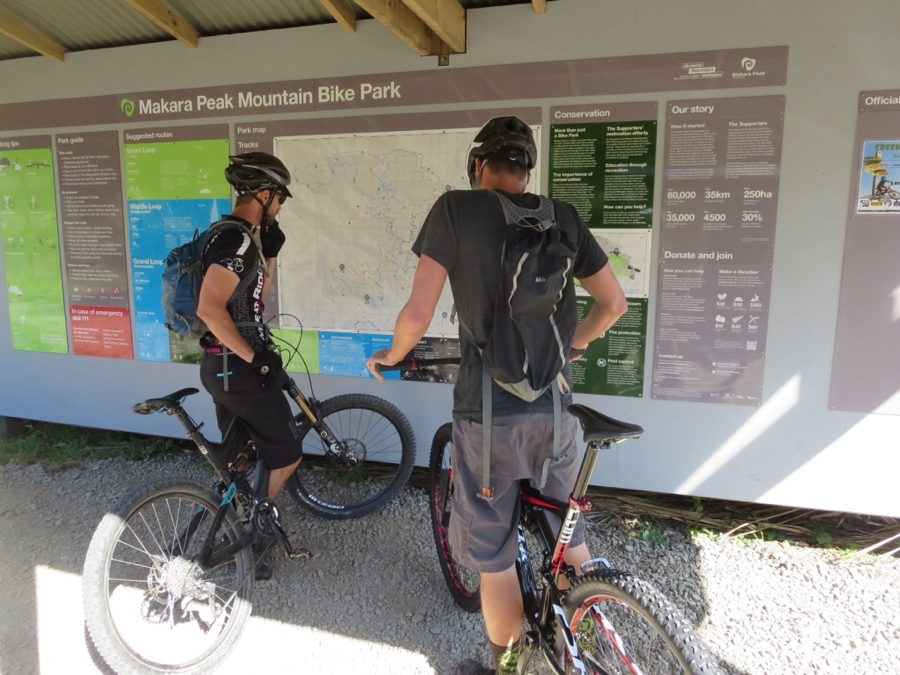 the base areas at makara peak mountain bike park

making our way up 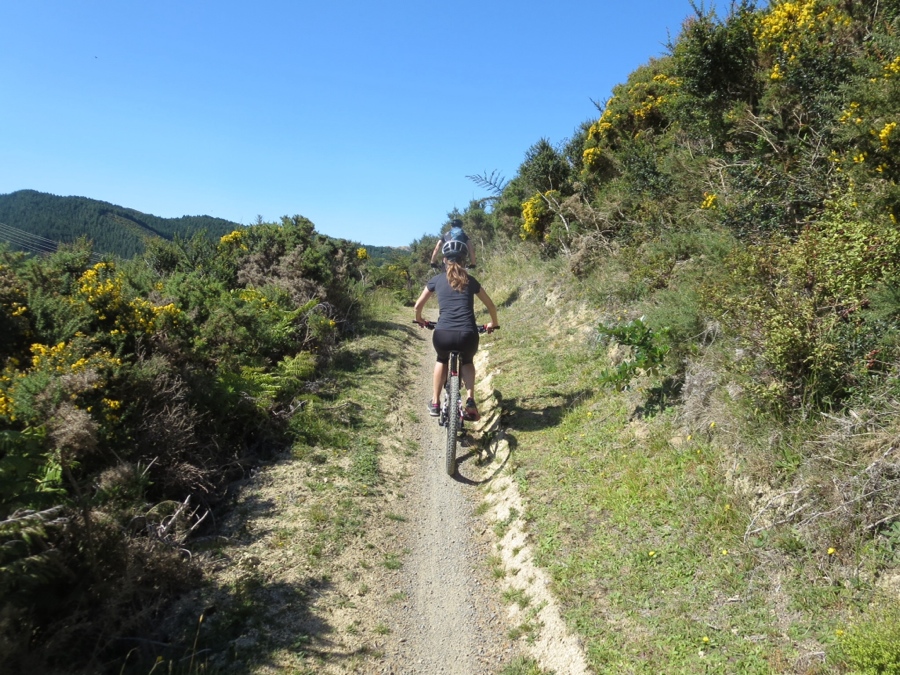 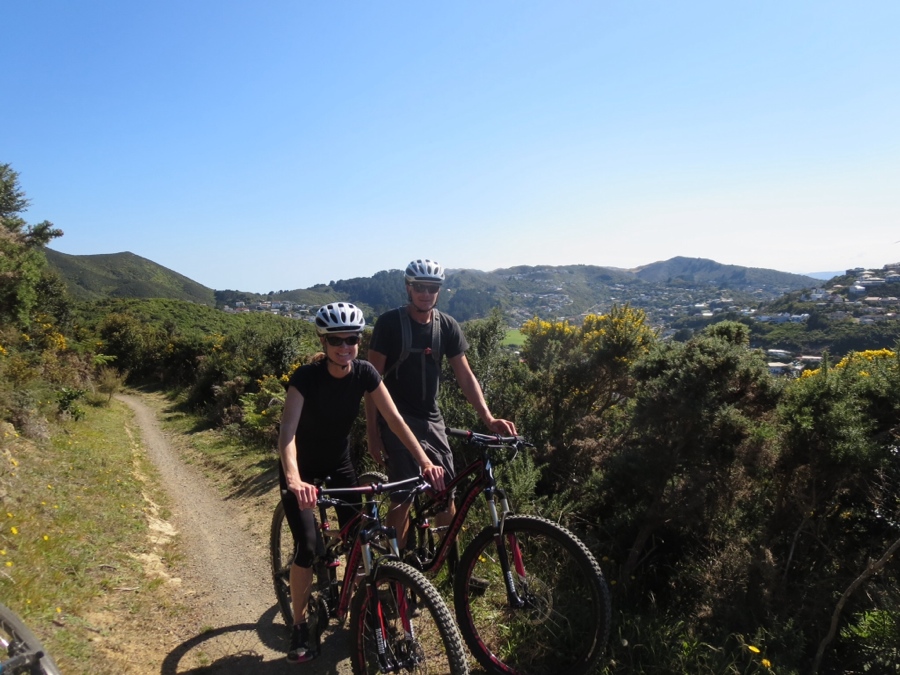 wayne does a couple jumps in the skills area

Jay filmed one of Wayne’s jumps on the GoPro – you can check it out here: http://youtu.be/r3BHebpMPHQ. Jay also filmed some of his mountain biking, but I’ll have to post that at a later date as the wifi is not cooperating. 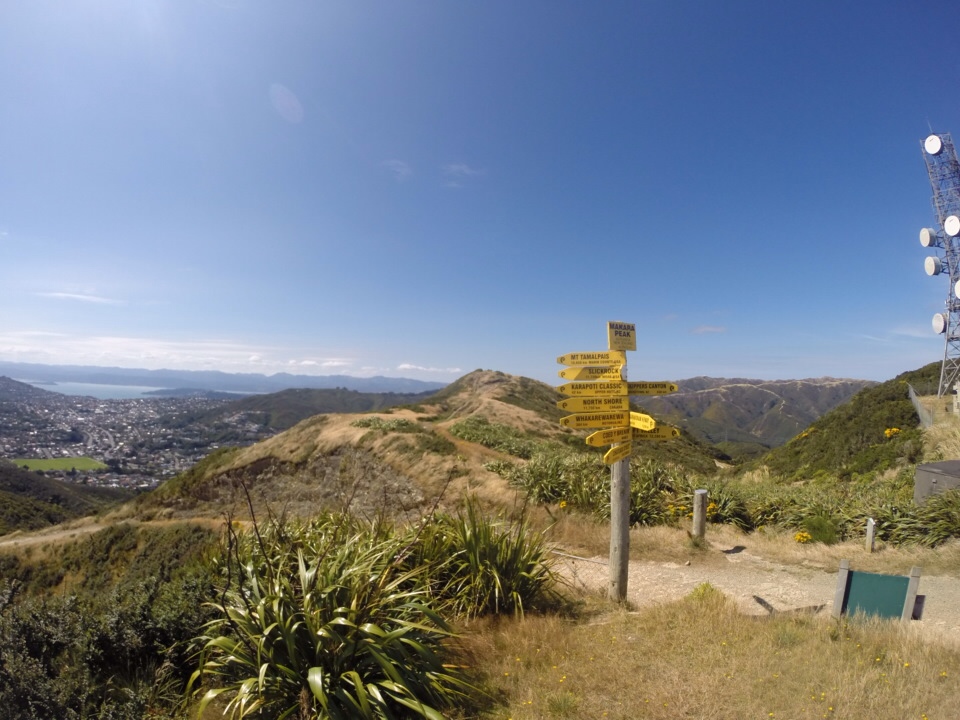 a leg burner to get to the top, but some pretty sweet views

That night, we got a little nap in before having to catch our 2:30AM ferry across the Cook Straight. Going from the North Island to the South Island in the middle of the night wasn’t our first choice, but there are limited sailings each day and issues with the fleet had made this our only option unless we wanted to wait a few days. It takes just a few hours to cross the Cook Straight on the slow moving ferry. I had never boarded a ship by driving on with a vehicle, so that was a fun experience! As we drove the campervan on board, it felt a little like pulling into a parking garage. But, we were immediately reminded that this was no parking garage – we were on a ferry and would soon be surrounded by water. We got out of the campervan and headed to the passenger area. Shortly afterwards, our journey to the South Island began. We leave the North Island with memories we will cherish for a lifetime and are looking forward to what the South Island will have in store!

driving the campervan onto the ferry 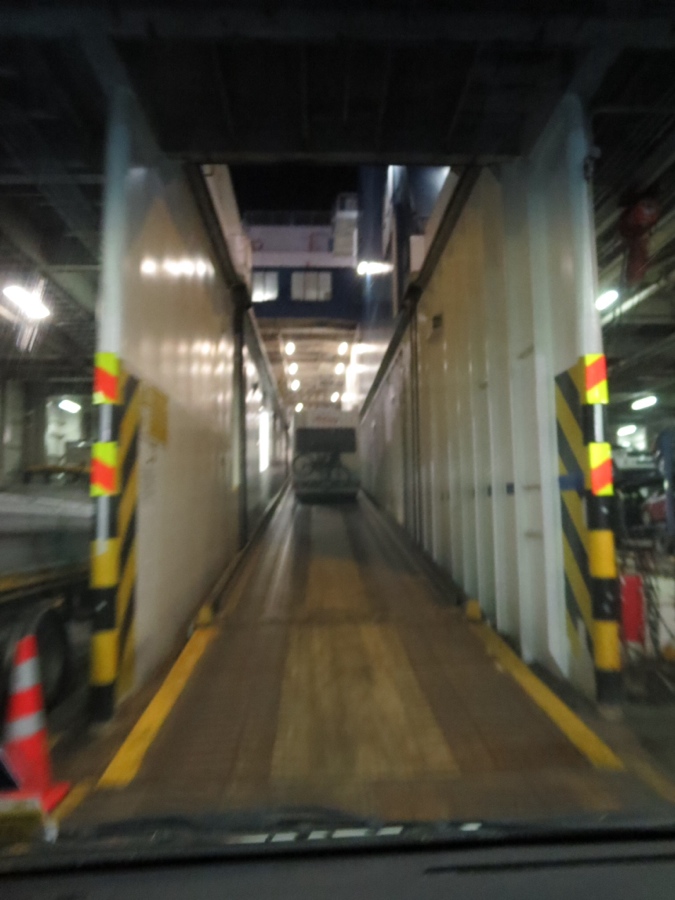 we are parked next to some large trailers

pulling into the port at picton

being directed for off-loading

driving off the ferry 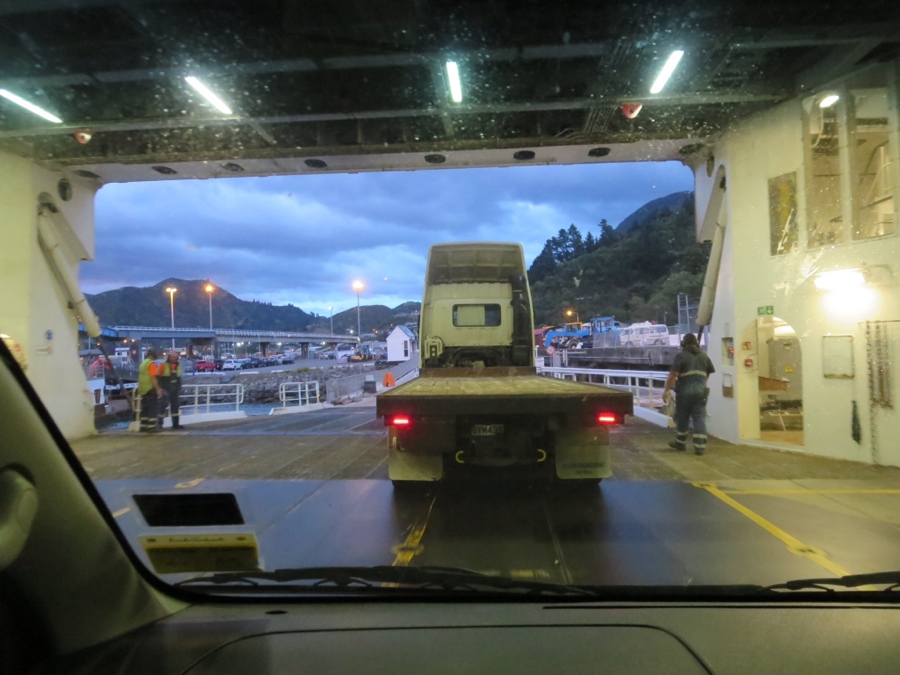