We ended our time in Egypt in Alexandria, which is a city on the Mediterranean coast. Although it is the second largest city in Egypt, we didn’t know much about it before going to Egypt and hadn’t planned on going there. But, we’d had our fill of visiting ancient sites and still had some time left in Egypt before our flight to Nigeria, so we decided to spend a couple days there.

It turned out to be a good decision. There was a more relaxed vibe in Alexandria. I was very different than the other parts of Egypt we visited; in some ways, it was more Mediterranean than Middle Eastern. The main stretch of Alexandria along the water is known as the Corniche. We stayed at a hotel on the Corniche and had a nice view of the Mediterranean from our room’s balcony. Some shots we took from the balcony…

In the mornings, we went for runs along the water. The Corniche has a nice, wide sidewalk, perfect for running. Unfortunately, not too many locals run and it seemed like we were the only foreign tourists in town, so we got lots of attention while running. Folks would yell “hello” and “good job” at us and wanted to give us high fives as we ran by.

On our first run, we made it to the Citadel of Qaitbey and decided to go ahead and check it out. It is a fortress built in the late 1400s by Sultan Qaitbey on the site of the former Pharos Lighthouse. Although it looks like a castle, it is a fortress that was built to protect the city from the crusaders who used to attack the city by sea. 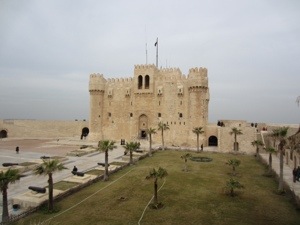 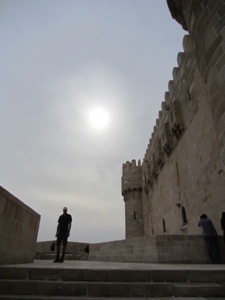 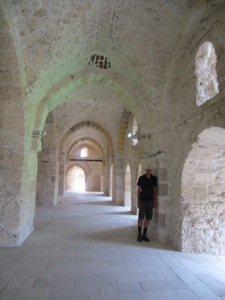 From the fortress, there were great views of the Mediterranean Sea and the port of Alexandria. 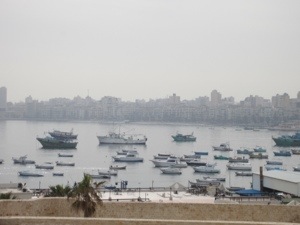 Other sites we saw in Alexandria included:

-The Roman Amphitheater ruins (which we just stumbled upon as they sit in the middle of the city, near the train station):

-The Statue of Saad Zaghloul (which quickly became our reference point for getting around the city): 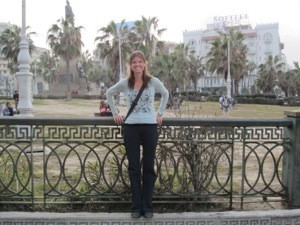 -The Mosque on the Corniche, not far from our hotel:

-And the Bibliotheca Alexandrina, which is built on the site of the ancient Library of Alexandria. It was so quiet inside (compared to the loud city streets of Alexandria) that my ears almost started ringing – it was very nice. We ended up getting lost roaming around inside and it took us a while to find our way out. The main reading room alone is 70,000 m² on eleven cascading levels. It is a beautiful library.

We spent a lot of time just wandering around the streets of Alexandria, which were packed with stores, restaurants, and cafes; perfect for people watching.

One of the things we enjoyed most about Alexandria was the food. For lunch our first day, we ate at the local’s fast food joint – Gad. The place had a line out the door. We enjoyed shwarma sandwiches and french fries. 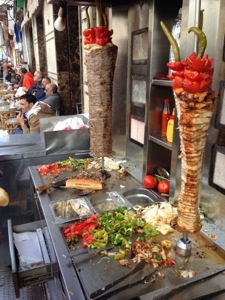 A couple of our favorite items to eat in Alexandria were mixed meat plates and greek salads. They also had good pizza there. 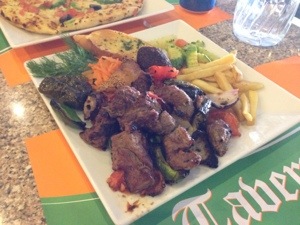 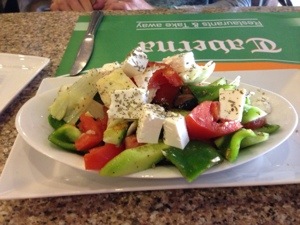 And last, but not least, Alexandria had good coffee! Having just spent weeks and weeks in places with nothing but Nescafé, access to espresso was a luxury. One of our favorite places was a popular little Brazilian coffee shop. They roasted the coffee beans right there in the shop. In addition to coffee, they had pastries and desserts too.

All in all, we had a nice, relaxing stay in Alexandria. 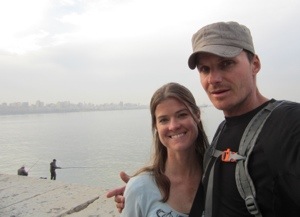