Ah, Barcelona! What a fantastic blend of old world and new world. In the center is the old city (Ciutat Vella), with winding, narrow streets lined with shops and restaurants. The original city squares have been preserved, many of the old buildings still stand, and even parts of the old city wall are still in existence. And although much has been remodeled and rebuilt over the centuries, the new blends perfectly with the old and the city hasn’t lost its character.

Barcelona is in the Catalonia region of Spain, so they speak Catalan instead of Spanish. Catalan is similar to Spanish, but different. Or, as they would say in Thailand, “same same but different”. I found a lot of it to just be Spanish words cut short. For example, “buen dia” instead of ‘buenos dias” or “mercat” instead of “mercado”. It was interesting to see and experience the difference. It makes you think about how languages have developed and evolved over time.

We thought we would spent just a few days in Barcelona, but ended up spending eight days there! We stayed in a little hotel in Barri Gótic, just off Plaça Sant Jaume.

View from our hotel window

One of greatest things about Barcelona is that it sits right on the Mediterranean Coast. The neighborhood with the beaches and marina is called Barceloneta. Nearby is the Olympic Port, the yacht harbor built for the 1992 Olympics. There is a boardwalk that runs through the entire area, which was perfect for running and biking. 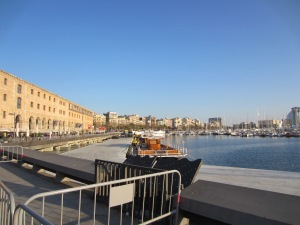 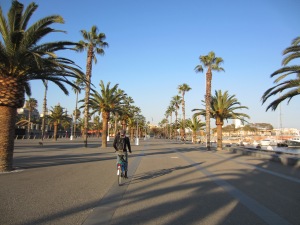 Riding by the yacht harbor 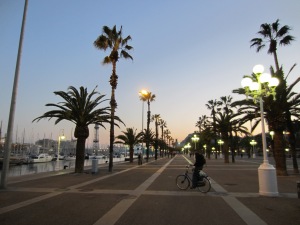 Biking in Barceloneta at sunset

Although it was too cold to get in the water while we were there, it was nice just to be on the beach and listen to the waves roll in. 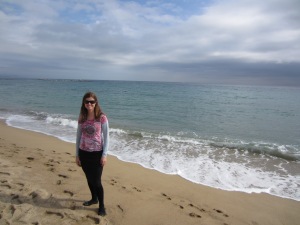 When we were at the beach on a Sunday afternoon, we got to experience live music and dancing filling the area. There were several different groups passing through the area. We weren’t sure if this was a special celebration or a regular occurrence; regardless, it was entertaining. 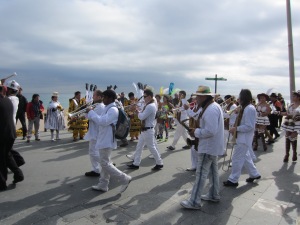 The morning after we arrived in Barcelona was the Barcelona Half Marathon. Unfortunately, I didn’t find out about it until the night before and registration was closed. It would have been fun to run it! Instead, I watched and cheered from the sidelines. I saw lots of bright, neon colors go by, which is definitely the latest trend in running fashion. 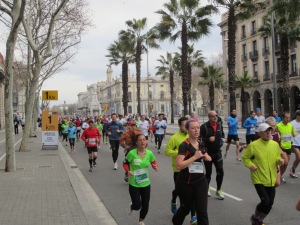 And now, highlights of the sites we saw in Barcelona (in no particular order)…

PARC DE LA CIUTADELLA: A big, beautiful park right in the city. It’s also where the city’s zoo is located.

THE ARC DE TRIOMF: The triumphal arch, which is a misleading name because it doesn’t memorialize a triumph; it was built as the entrance way for an exhibition in the late 1800’s. 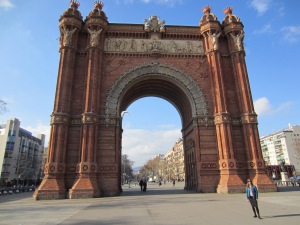 One of the many bike stations across this bike-friendly city 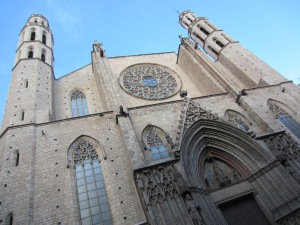 PICASSO MUSEUM: Picasso lived in Barcelona for a number of years during the early part of his career. The museum has his paintings arranged in chronological order, which provides great insight and perspective into how his art changed over the years. Personally, I prefer his early works; when he drew true-to-life portraits and landscapes. One of the things I found most interesting at the museum was that they had a number of his sketch books on display from his youth. The museum resides in what was formerly five large palaces in the Old City. 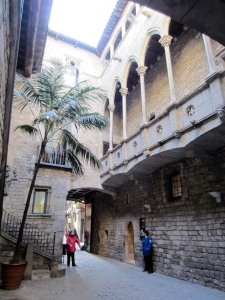 THE COLUMBUS MONUMENT: A tall statue of Christopher Columbus, constructed in honor of his first voyage to the Americas. It also serves as a great reference point in knowing where you are in the city since it sits at the port end of Las Ramblas.

LAS RAMBLAS: AKA “the main tourist drag in Barcelona”.  It’s a series of tree-shaded pedestrian malls that go from the Placa de Catalunya to the port. 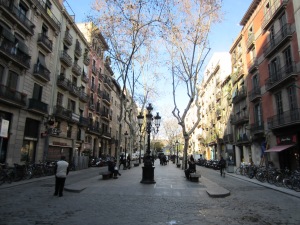 SAGRADA FAMILIA: One of Barcelona’s most visited sites is this large Roman Catholic church designed by Barcelona’s famous architect, Antonio Gaudí. It’s been under construction since 1882; estimates are that it will be another 50+ years before it’s finished. It’s really more a work of art than a church. What I like about Gaudi’s work is that it’s all inspired by nature. As explained on one of the displays within the church, “The inside of the temple is like a huge forest…the structure that holds up the inside of the temple naves is like a tree, with the trunk, the branches and a canopy of leaves as the ceiling.” 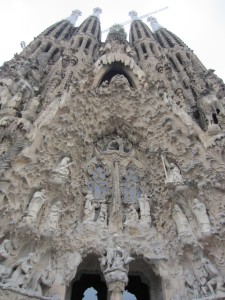 The roof of the nave, which mirrors trees and branches

At Sagrada Familia, there is the option of going up the towers, which is a must do. From the top of the towers there are terrific views of the city.

The circular elevator and stairs to the towers

A view from the top

Another view from the top

Standing on a bridge between two towers

Taking the stairs back down

A little overlook part way down the stairs

CATEDRAL DE BARCELONA: This cathedral sits in the heart of Barcelona. It was constructed in the 14th century and is the seat of the Archbishop of Barcelona. We went there one night for a free pipe organ concert. The songs played included works by Bach and Mozart; we enjoyed it.

At this cathedral they had a sight I had never seen before…electric prayer candles. A candle is lit after you insert money.

PARK GUELL: This park sits on a large hill on the outskirts of the city. It was designed by Antoni Gaudi, the same architect who designed the Sagrada Familia and a number of other sites in Barcelona. When we exited the subway stop for this site, it felt like we had been transported to San Francisco. The roads were so steep, the sidewalks had stairs and escalators.

Riding one of the many escalators

View from the top of the series of escalators

Park Guell is quite unique; it is more like a work of art than a city park. And because the park sits on a prominent hill, it has great views of the city. 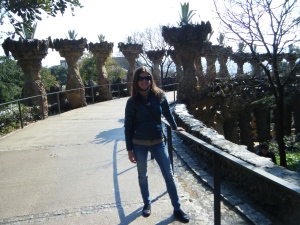 On the park’s main terrace

At the park, they had these free-standing pay-per-use toilet stalls, which I thought were quite clever. The door unlocks after you insert $0.50 Euro. 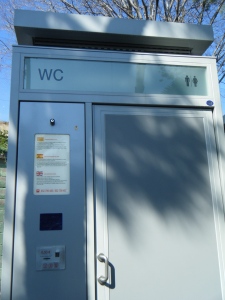 PLACA DE CATALUNYA: In English, “Catalonia Square”. It’s only fitting that this is where we first stepped foot on Catalonia ground. It’s where the airport shuttle bus dropped us off when we first arrived in town.

MONTJUIC: Literally “Jew Mountain”. It’s a big hill on the edge of Barcelona full of various sites and attractions, including several venues of the 1992 Summer Olympics. We rode bikes up Montjuic to check out some of the sites. The views got better and better as we made our way up (and the climbing got steeper and steeper as well). At the summit is a fortress that was built in the 18th century, which has expansive views of the city, sea and port (Barcelona’s port is far larger than we realized before seeing it from this vantage point).

Making our way up Montjuic 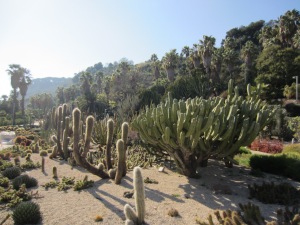 One of many beautiful gardens at Montjuic

Only part way up and already nice views 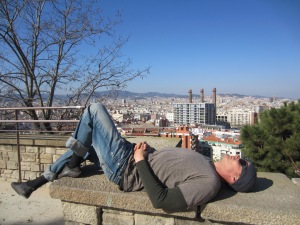 Hmm…fruit with Nutella for a little snack 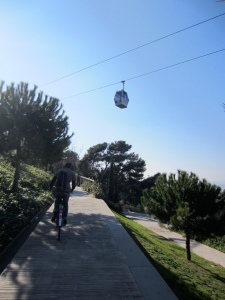 As we get closer to the summit, it’s getting pretty steep

Yes, we made it to the fortress at the summit!

Panoramic views from each side of the fortress walls

One section of Barcelona’s port

That is one big piece of machinery

Panoramic view from the city side of the fortress

Love how the bird is mid-flight behind me! 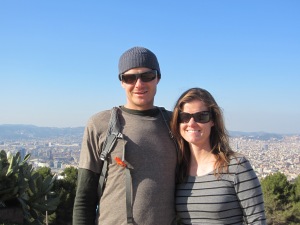 So that wraps up the highlights of the sites. Stayed tuned for the next Barcelona post which will include food, drinks, and flamenco!