This is officially the last blog post of our journey this winter. Ideally, I would have finished blogging while we were still traveling, but I got behind. It is definitely harder to blog after being back home and no longer in the moment. I’ve found that playing music from the country where we traveled helps bring me back. For this last post on Iceland, I have Sigur Rós playing in the background. They are an Icelandic band whose music is inspired by Iceland itself – perfect!

Our best day in Iceland was the day we explored the South Coast. By the end of this day, we were fully convinced that we must come back to Iceland again someday. We started the day with a drive along the coast from Reykjavik to the Seljalandsfoss Waterfall. The waterfall drops 200 feet over cliffs that used to be the country’s coastline; the coastline is now about 3 miles away from these cliffs. 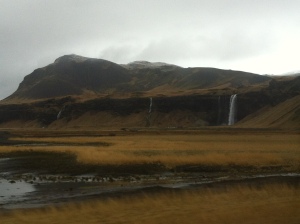 Cliffs that used to form the coastline 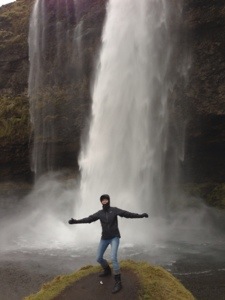 Feeling the powerful force of the waterfall!

Iceland has A LOT of waterfalls; what’s unique about this one is that there is a trail that runs all the way around it, so you can even walk behind the waterfall, which is a powerful experience. It was a little cold with all the water spraying, but incredibly refreshing. 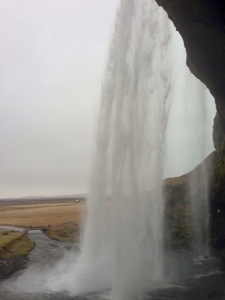 View from behind the waterfall 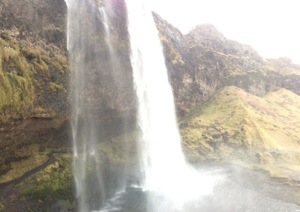 View of the path that runs behind the waterfall

After Seljalandsfoss, we headed to Solheimajokull Glacier. This glacier has been retreating very fast in recent decades. The first parking lot that was used 40 years ago is now so far away it is never used, same with the 2nd parking lot. There is now a 3rd parking lot that is used, which is getting farther and farther away as the glacier retreats. It’s an additional 10 minutes walk from what it was just 10 years ago. 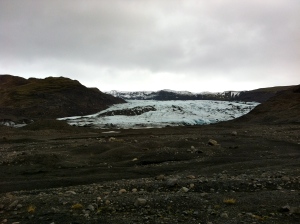 View from the 3rd parking lot

The glacier reduces in size by 20-30 meters every year. The glacier is featured in the 2012 documentary “Chasing Ice”, which coincidently, was filmed and produced by a team of Boulder residents – I want to see it. Because the landscape near the glacier is constantly changing, as we got close to it, we were likely walking on ground that had never been walked on before, which is fascinating to think about. As we stood there, we could hear the glacier moving and changing. It was pretty incredible. 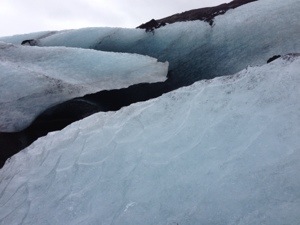 Looks like it would be cool to walk under 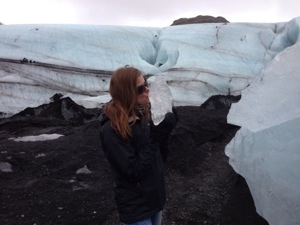 We climbed up the hillside to get a different look

After the glacier, we went to another waterfall, Skogafoss. This one is also over the cliffs of former coastline. Legend has it that a man buried a chest of gold in a cave behind this waterfall, which has yet to be recovered (although attempts have been made). 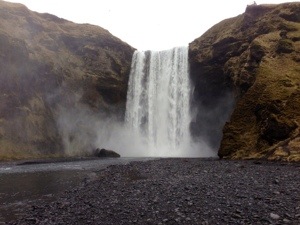 Near the waterfall, in the village of Skógar, is a folk museum filled with Icelandic artifacts. In the museum is the first bible translated into Icelandic (before this translations, they used a bible written in Latin that most didn’t understand).

The museum dedicates a whole room to the history of fishing in Iceland, complete with an old rowboat on display.

A glimpse into the history of Icelandic fishing

Outside the museum is a sort of “living” museum – old turf homes, a church, and a schoolhouse, which were transported from different parts of the country and rebuilt here. Each one is completely furnished inside, with original artifacts. Exploring them gives you a sense of how the Icelandic people used to live and work.

People must have been shorter back then 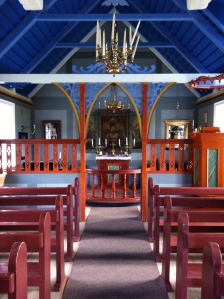 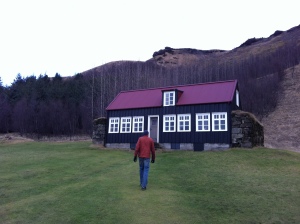 Piano inside the schoolhouse, which I really wanted to play

The village of Skógar from afar

Following our time at the museum of Skógar, we headed further down the coast to the southern most part of Iceland. We visited the cliffs of Cape Dyrholaey and the black sand beach of Reynisfjara. The black sand is from volcanic ash. The beach was like no other beach I had walked on before – we had black, pebbly sand under our feet, a ridiculous wind nearly knocking us over and the most powerful waves crashing into the shore. 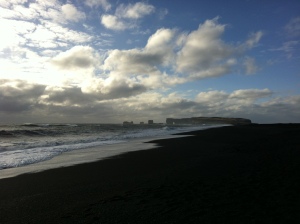 Just off the coast are two large rock formations, believed to be trolls who were caught by the sunlight and suffered petrifaction (most Icelanders believe in trolls and there is much folklore about their history in Iceland). 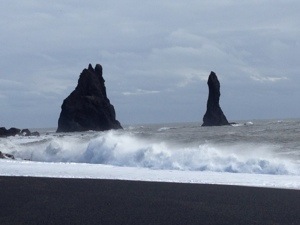 On shore are stacks of basalt columns where puffins live in the summer. 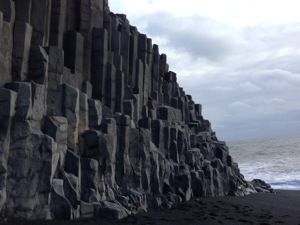 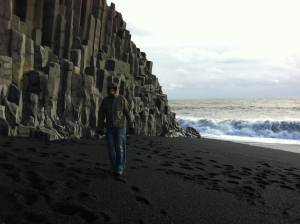 It was quite windy and cold

After our walk on the beach, we went up to the nearby cliffs of Cape Dyrholaey. 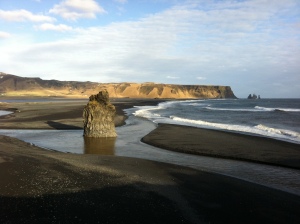 View of Reynisfjara beach from the cliffs

On the cliffs of Cape Dyrholaey

From the cliffs, there were great views of the mountains

Our final stop for the day was to the Eyjafjallajokull Visitor Center. Eyjafjallajokull is the volcano that erupted in 2010, emitting such a thick plume of volcanic ash that it stopped international air travel for days. There is a family farm located just below the volcano. After the eruption, so many people came by asking the family about the volcano, that they decided to create a visitor center and a 20-minute film about the eruption. The film gives you a glimpse of what it was like for the family to live through it. The family had to evacuate the area three different times; there was a big uncertainty as to when the eruption was going to stop. When it finally did and they returned to the farm, it was completely covered with ash – from 5cm think on the flat land to 1 meter thick on the hillside (the ash was 4-5 meters thick at the crater). Determined to recover the farm, they spent FOUR MONTHS clearing the land of ash. During this time, all their livestock had to kept indoors (eating grass covered with ash would have cut the insides of their stomachs). Watching the film was a touching reminder of how resilient people can be in the face of tragedy.

Family farm at the base of Eyjafjallajokull 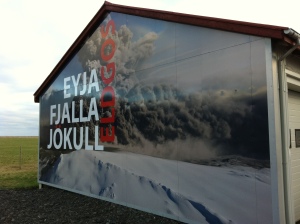 An aerial view of the area inside the visitor center; the nearby Katla volcano is overdue for eruption

Shirt for sale at the visitor center – hilarious!

On the ride back to Reykjavik, we saw a group of Icelandic horses in a field and pulled over to get a closer look. The horses came right up to the fence to greet us, and we were able to pet them. They are such beautiful creatures. And as we stood there admiring them, the sun was starting to set and it created a magnificent backdrop behind the horses – it was a special moment. And it was a brilliant sunset the night; the perfect end to one of the best days of our trip. 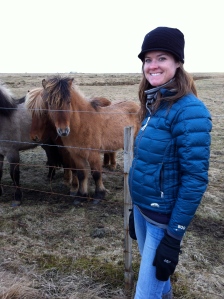 Views of the sunset on the drive back to Reykjavik

A perfect ending to the day

Overnight, the weather took a dramatic turn for the worse. We decided to stay in Reykjavik and explore the city a bit. The winds were so strong they almost knocked us over at times. It would have been funny if it weren’t nearly terrifying! We braved it out for as long as we could. 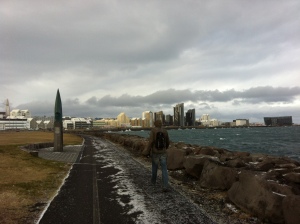 Taking the pathway along the Reykjavik shore 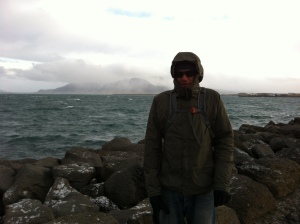 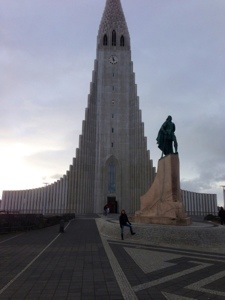 Views of Reykjavik from the church’s observation tower 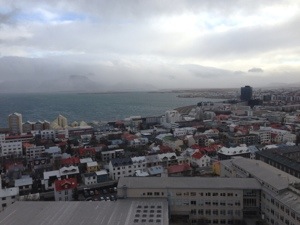 Reykjavik has lots of colorful buildings 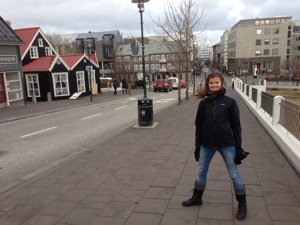 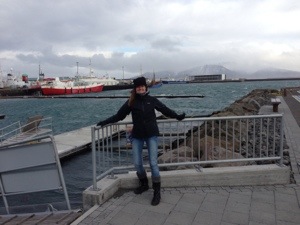 The next day, we enjoyed a relaxing morning at Laugardalslaug, one of the many geothermal pools in the city. It was a nice way to spend our last few hours before heading to the airport to catch our flight home.

We had a direct flight from Reyjavik to Denver on Iceland Air. Their different planes are named after volcanoes. Fittingly, we flew home on the plane named Eyjafjallajokull.

As we travelled home, I reflected back on our journey. That night, as I sent an email to my family, this is part of what I wrote…“It’s bitter sweet coming home. It’s good to be back, but a little said to think this journey is over. What an incredible 3 months it has been! Of course, there were ups and downs along the way….some good days, some bad days, some just OK days, and some absolutely fantastic days. But I consider each day a gift. We end these travels with a better understanding of ourselves, each other, and our magnificent God. We come home with a renewed drive to live our lives in a better way. We have made goals to improve the way we manage our time, our finances, our careers, and our health. I pray that we will not lose sight of these goals as we settle back into our lives at home.”

We are thankful for the journey.

1 Thessalonians 5:16-18 Rejoice always, pray continually, give thanks in all circumstances; for this is God’s will for you in Christ Jesus.

8 responses to “Iceland – Reykjavik and the South Coast”