When I think of Germany, after the holocaust, the next thing that comes to mind is the Berlin Wall. I remember being in 6th grade when the wall came down and sitting in class as our teacher explained the significance of this moment. It wasn’t until being in Berlin this past week that I really grasped the reality of what happened. I can’t even imagine waking up one morning to find out that overnight, a barbed wired fence has been installed through the middle of your city and you can no longer cross over. To wake up and find yourself separated from friends and family on the other side, with no indication of when or how you might see them again. That barbed wire fence later became the concrete Berlin Wall, which divided the city from 1961 to 1989.

The wall was 95 miles long. Only small section of the wall, about one mile long, still stands. It stands as an international memorial for freedom; it’s filled with artwork and is called the East Side Gallery. 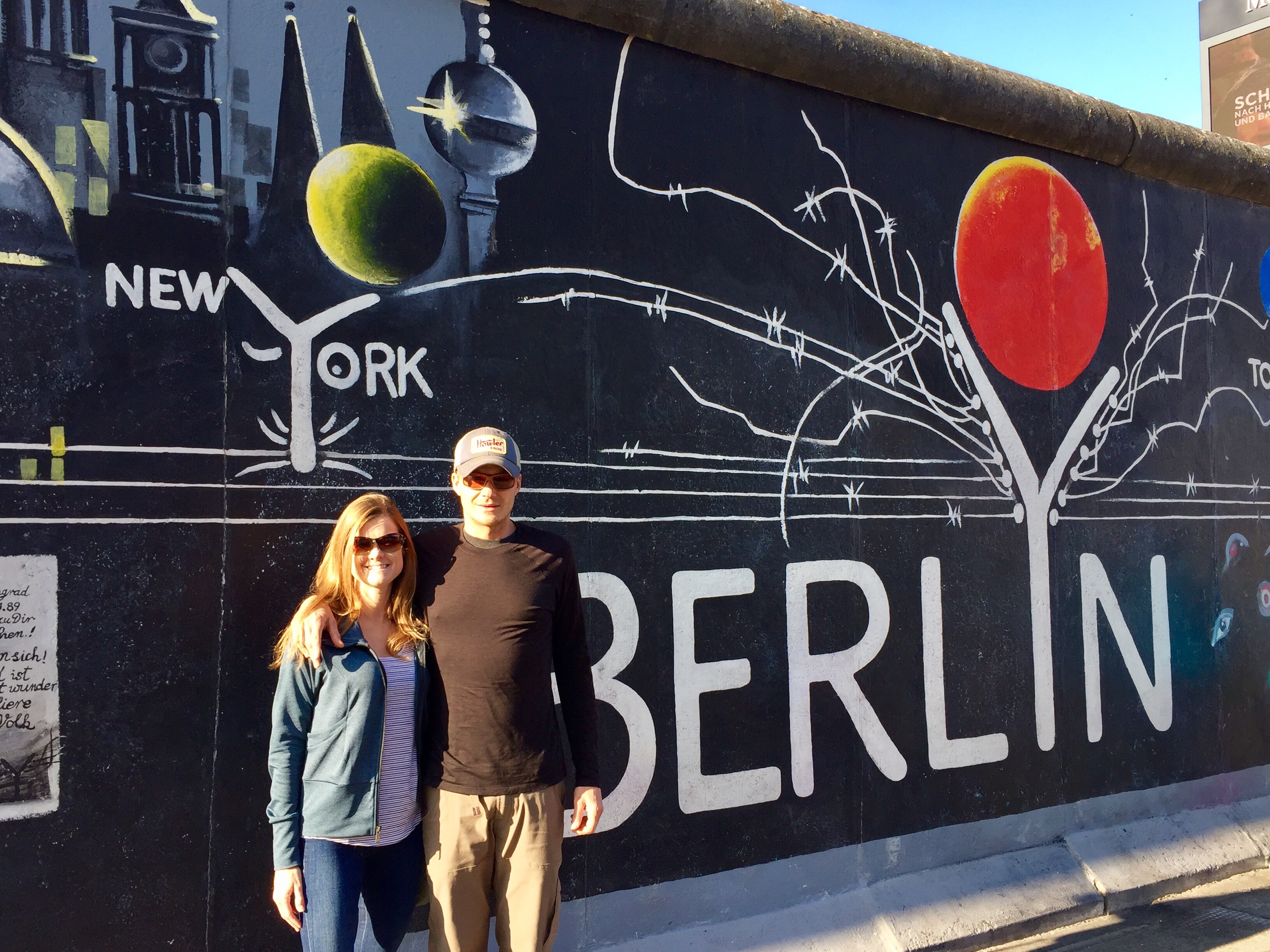 at the berlin wall 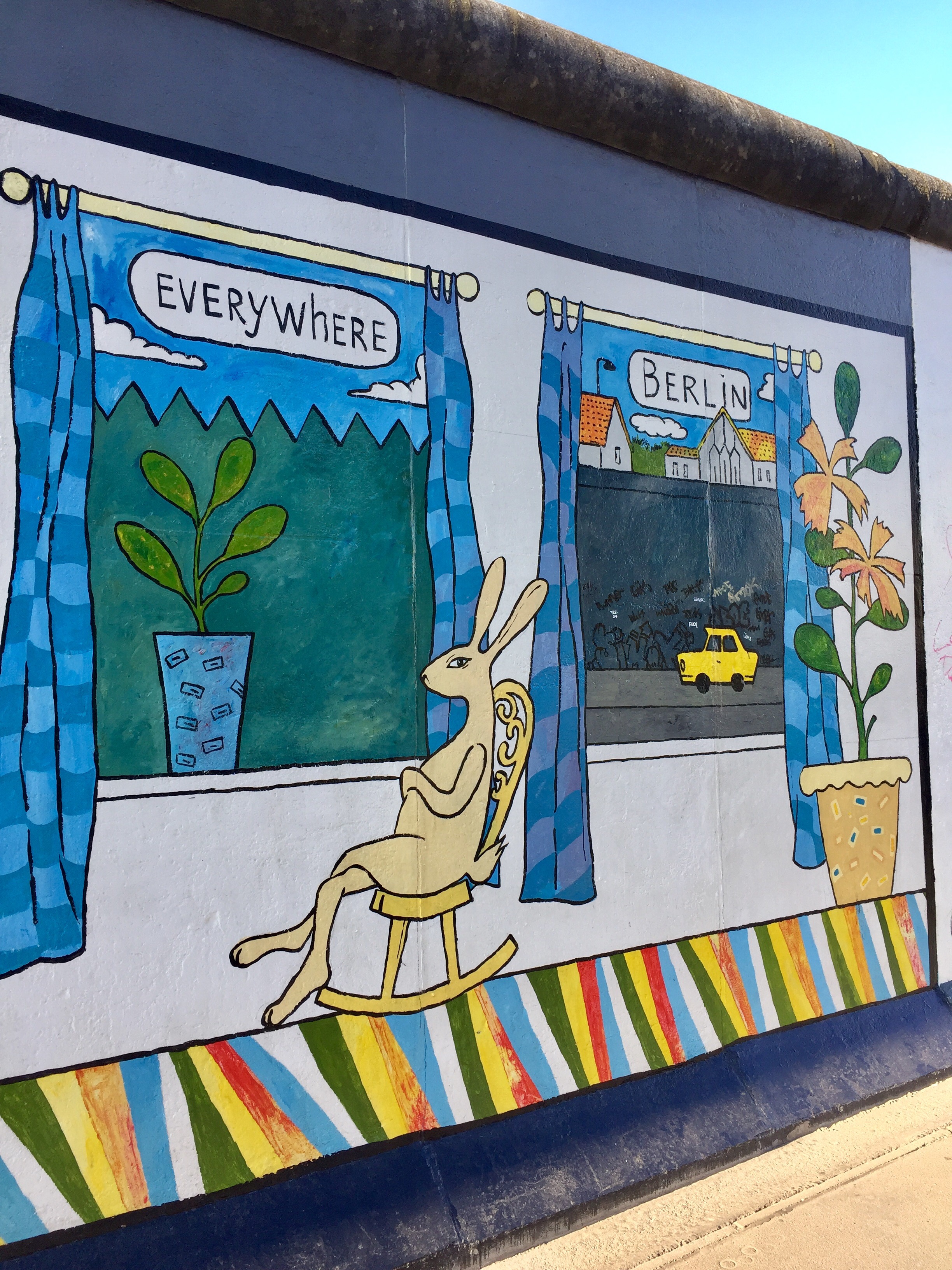 one of many pieces of art on the wall

When we were at the wall, a man was playing tunes on an accordion. If you look closely in the following picture, you’ll see on the left side portion of the wall, a thumb shackled into the “thumbs up” position. An illustration of being forced to act like everything was OK when the wall stood, when clearly it was not. A lack of freedom. 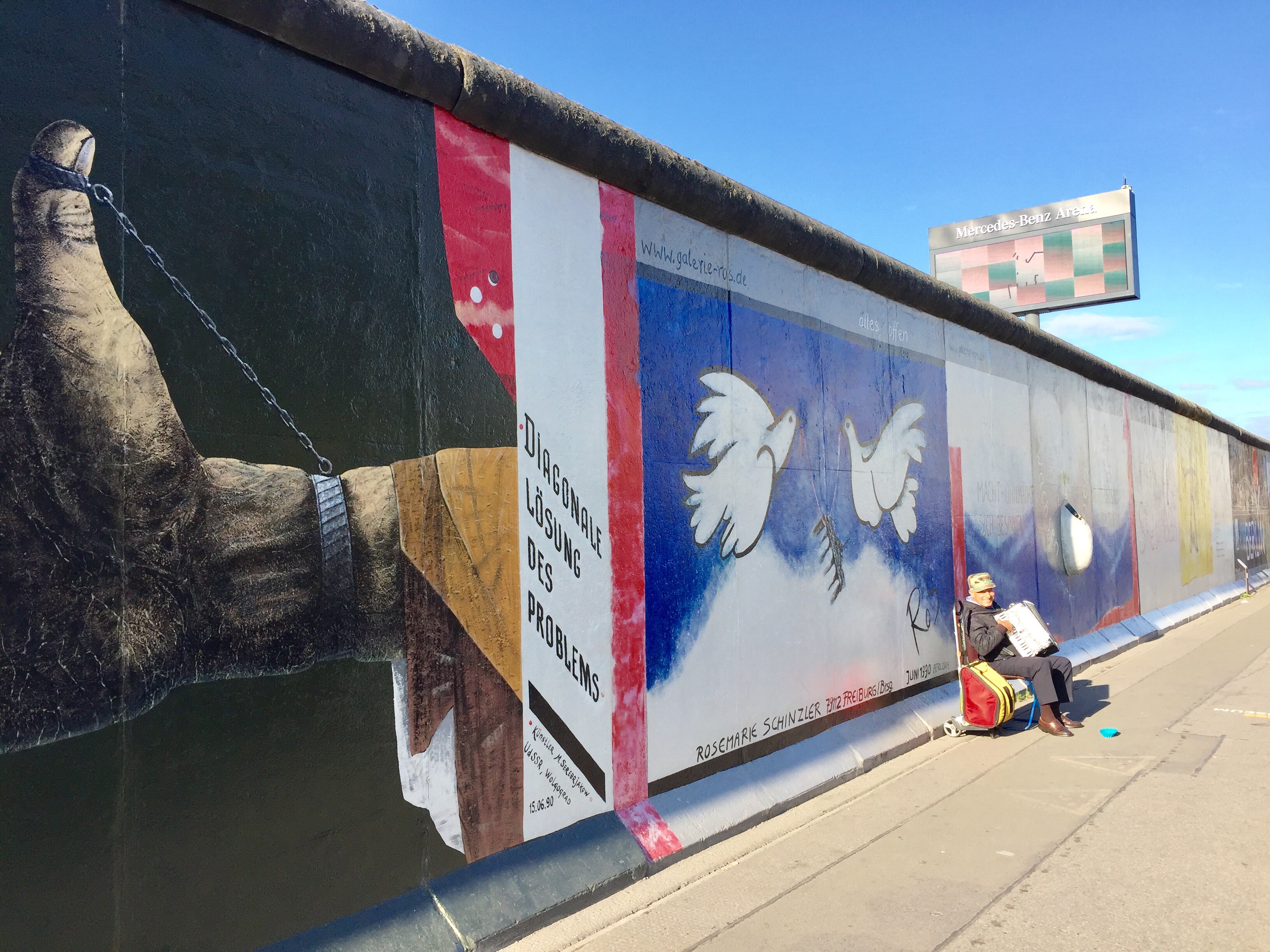 a forced thumbs up

People who got caught attempting to cross over the wall were shot and killed.

a memorial to those killed attempting to cross over the wall

One day in Berlin we did a bus tour. Our tour guide was born in East Berlin in 1985 and had a very traditional East Berlin name. When she got older, she asked her parents why they gave her a name that is so hard for people everywhere outside of East Berlin to pronounce. They explained to her that at the time she was born, they never thought their family would ever be able to leave the confines of East Berlin.

We visited Tranenpalast (the Palace of Tears). It was the site of luggage and passport control at the Friedrichstraße railway station check-in hall. It was where many tearful goodbyes were said, giving it the nickname “Palace of Tears”. Now, it’s a small museum full of personal stories of what the partition of Germany meant for many Berliners.

We also visited Checkpoint Charlie (checkpoint C), which was the checkpoint between the American and Soviet Sector of the city. 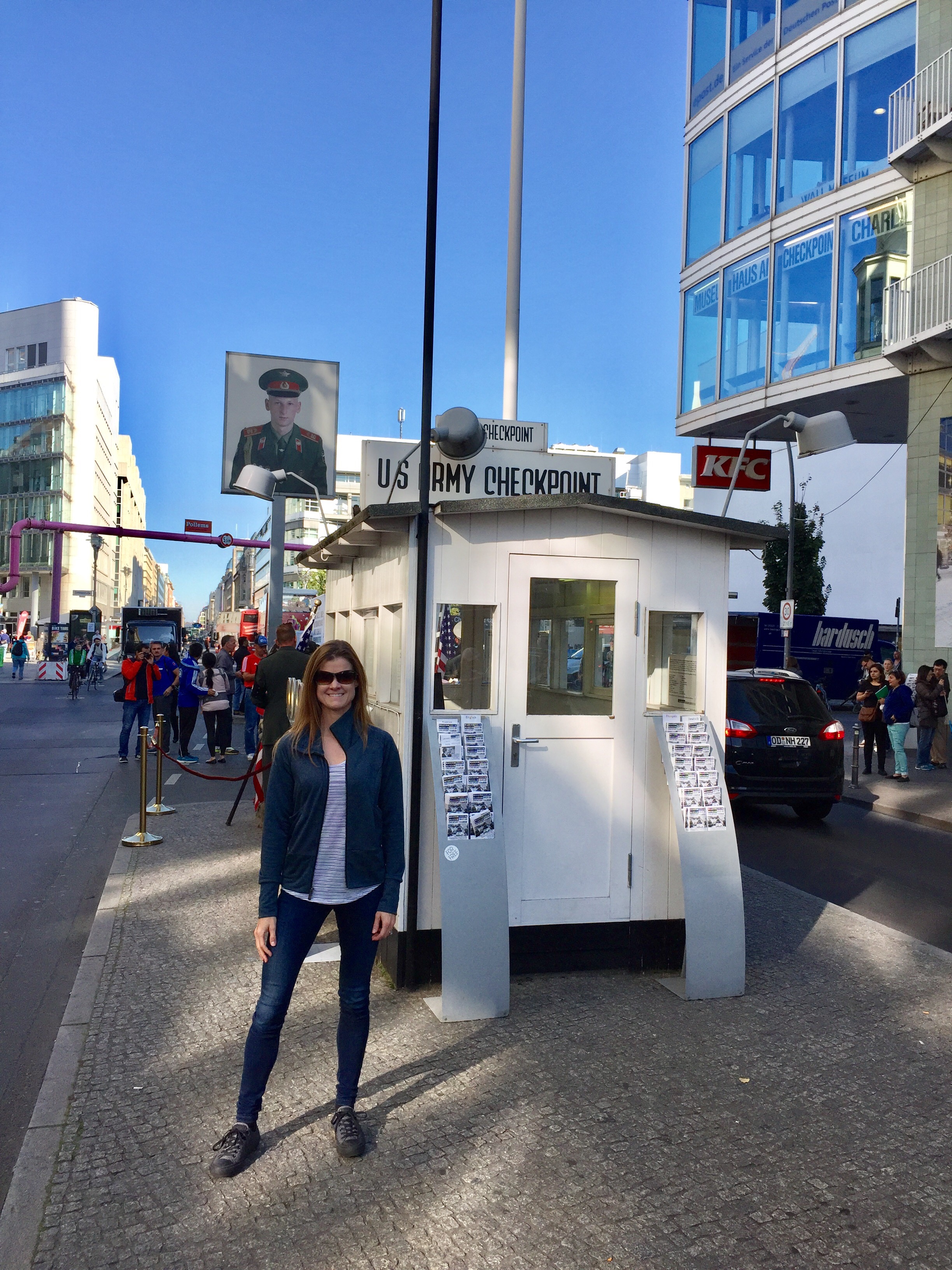 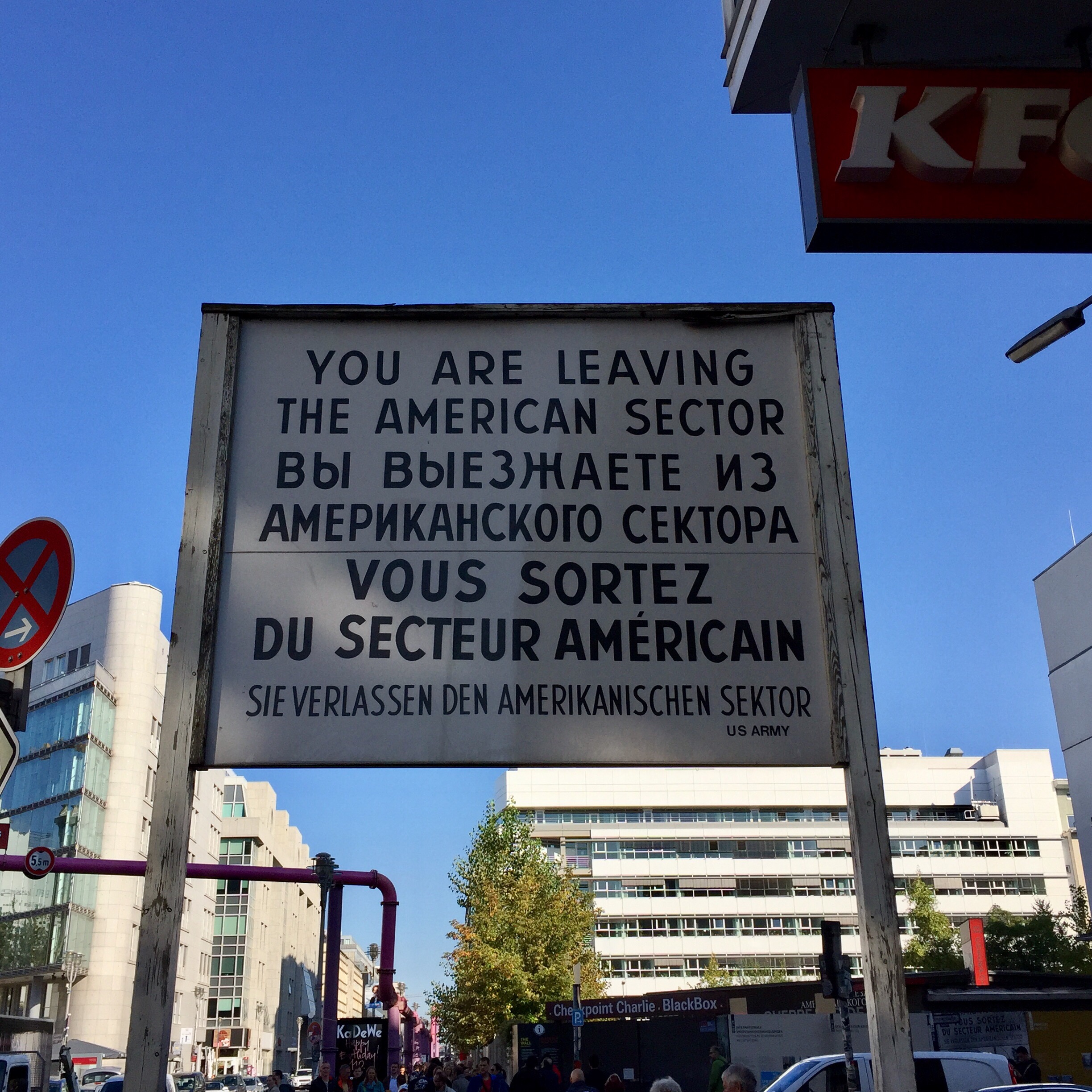 During World War II, large parts of Berlin were destroyed in air raids. We visited a number of historic sites, many that had been restored or rebuilt and many still with bullet holes from the war. 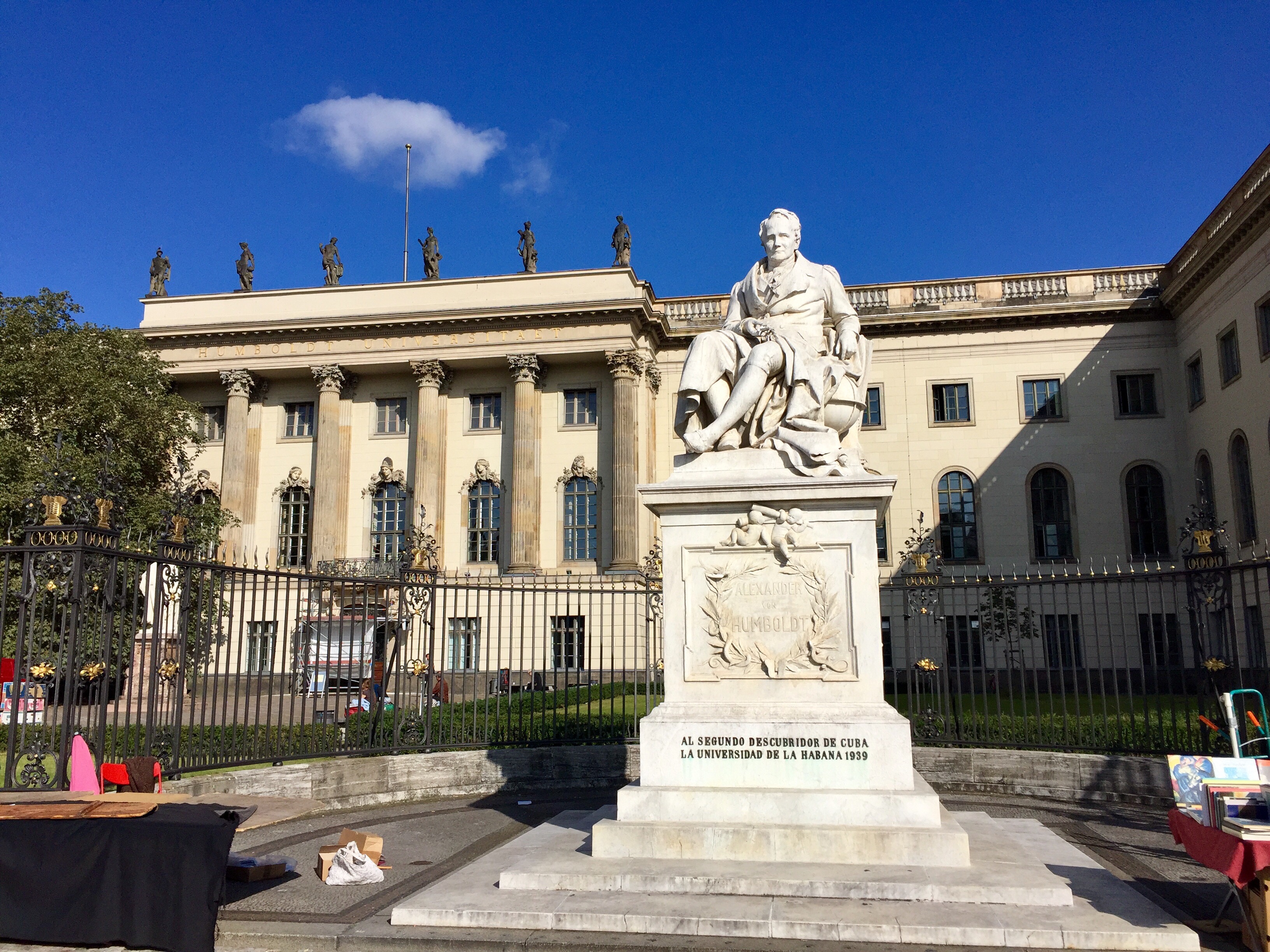 Humbolt University, where Albert Einstein was a professor

Germany forever changed on the evening of November 9, 1989, when East German government official Günter Schabowski blundered an announcement at a press conference about new travel regulations. When the media pressed for details, he incorrectly confirmed that the regulations included the border crossings through the Wall into West Berlin. And when asked about timing, he looked through his notes, couldn’t find a date, and said “immediately”. Upon hearing this, crowds of people made their way to the wall. And the next thing you know, just as fast as the wall went up, the wall was coming down. What a moment in history!

My Aunt Becky was in Germany just after the wall came down. She shared how East Berlin still looked very 1940’s at the time. Well, that has all changed now. The neighborhoods in East Berlin are now the hip and trendy ones. East Berlin drew a lot a people in the 90’s because it was inexpensive. The development over the last almost 30 years has made it hard to even tell where the wall once stood and which side was East Berlin vs. West Berlin. We stayed at the Berlin Marriott and the wall use to go through where the hotel now stands. There are bricks that mark where the wall once stood. 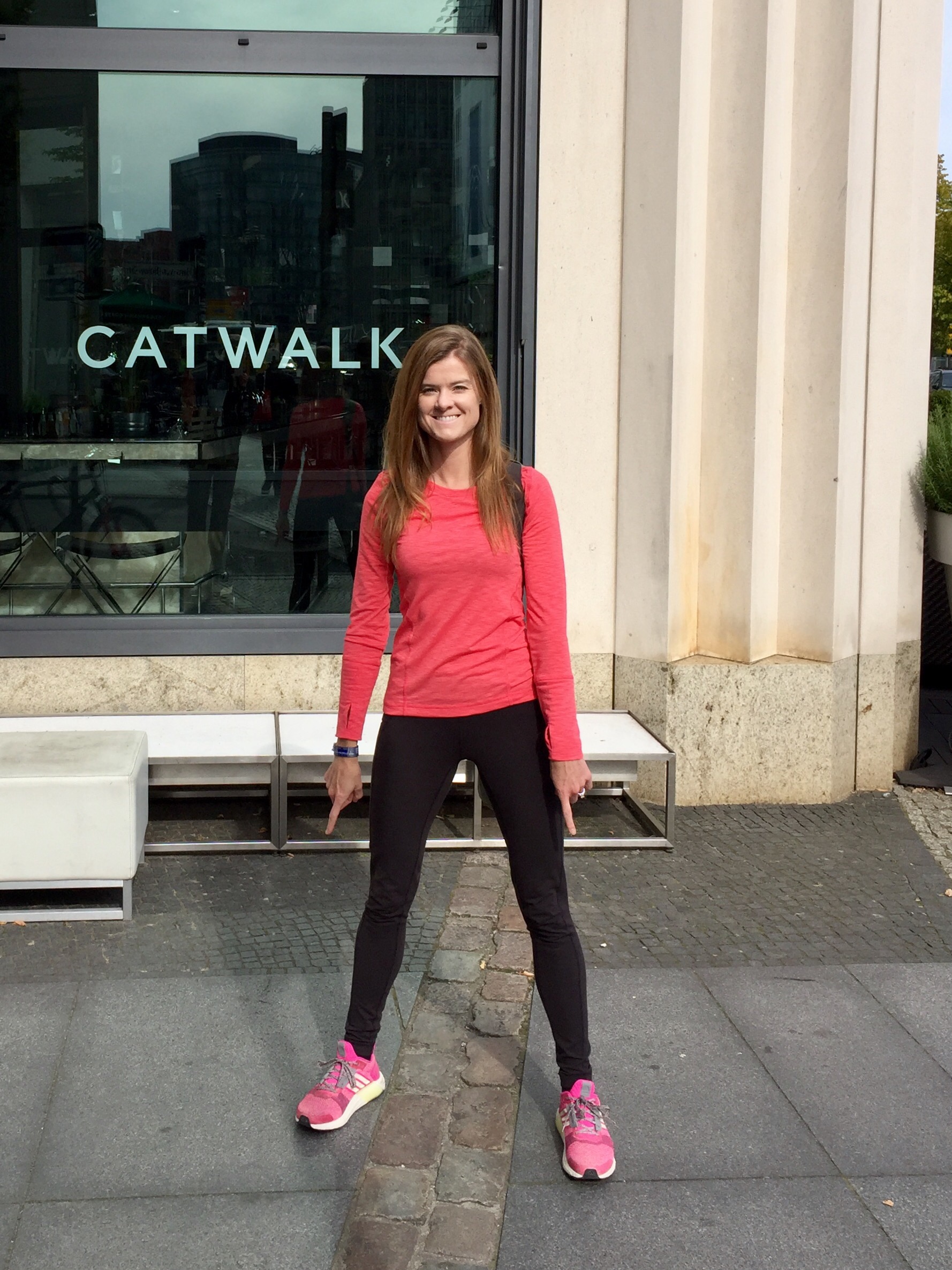 standing where the Berlin Wall once stood

We did a boat tour on the Spree River. On the tour, we were told that Berlin has more waterways and bridges than Venice, Amsterdam and Stockholm combined. 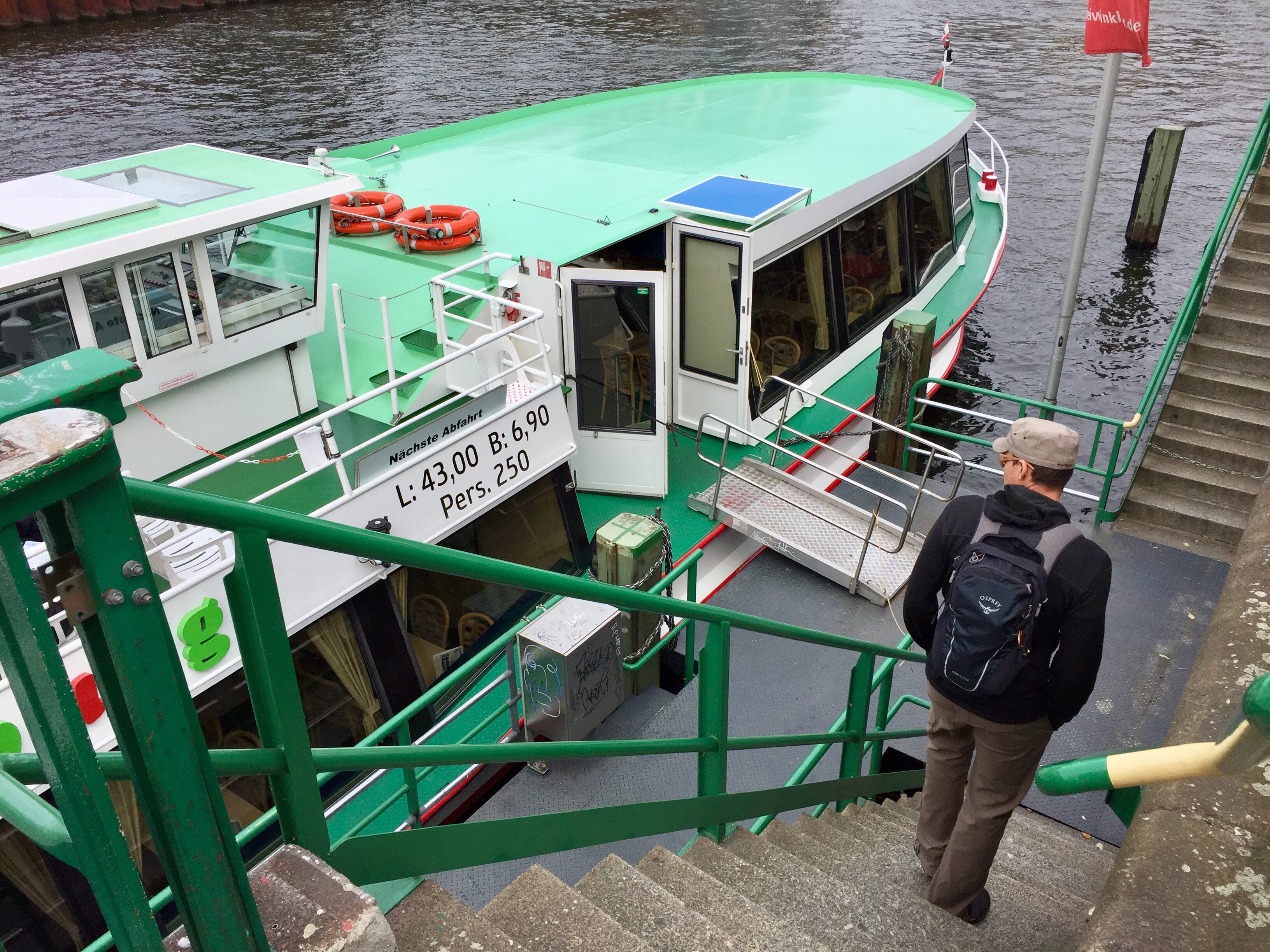 boat tour on the spree river 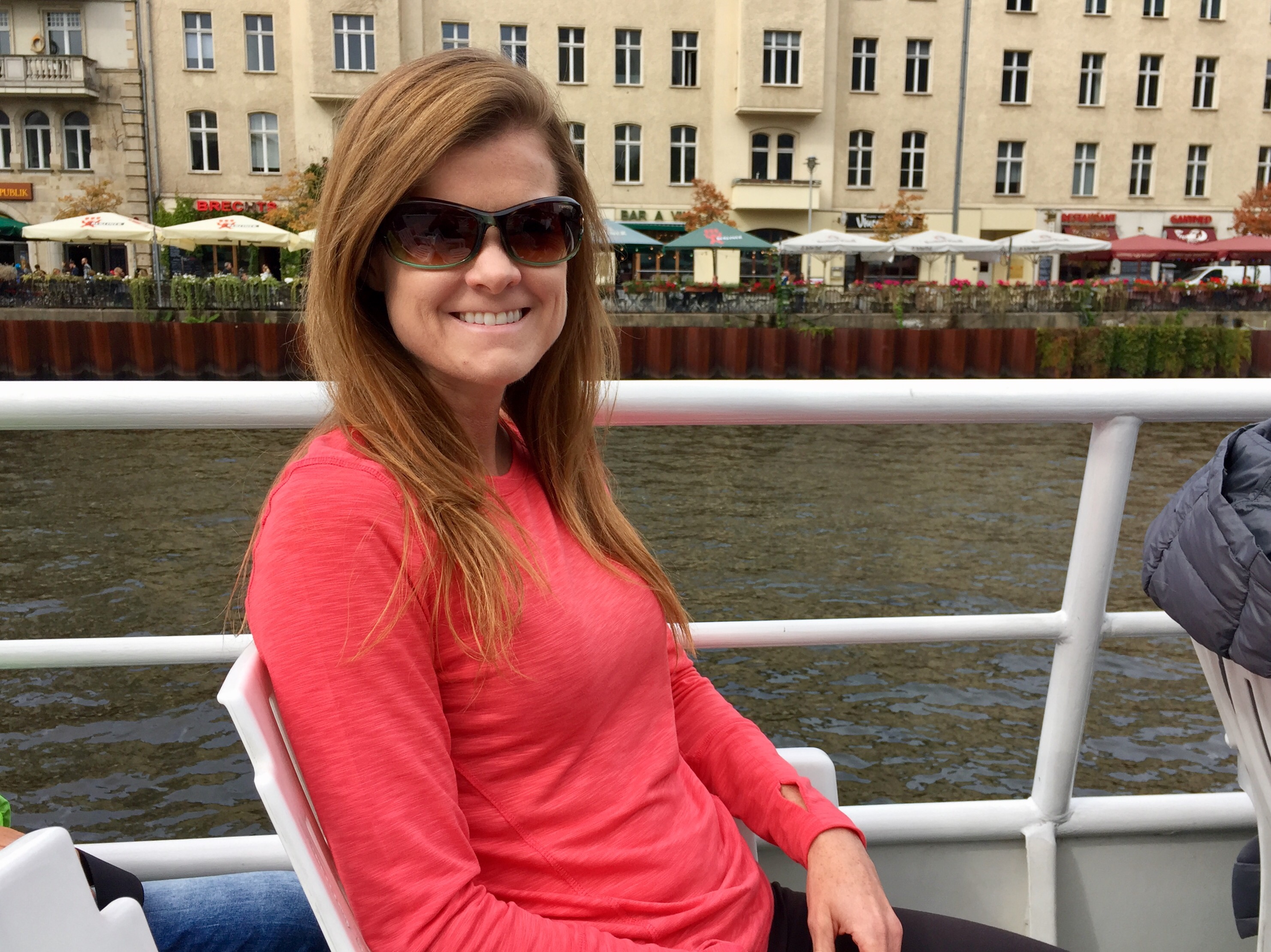 The boat tour was a relaxing way to see some of the historic sites of the city from a different vantage point.

the tv tower you can see from all over the city 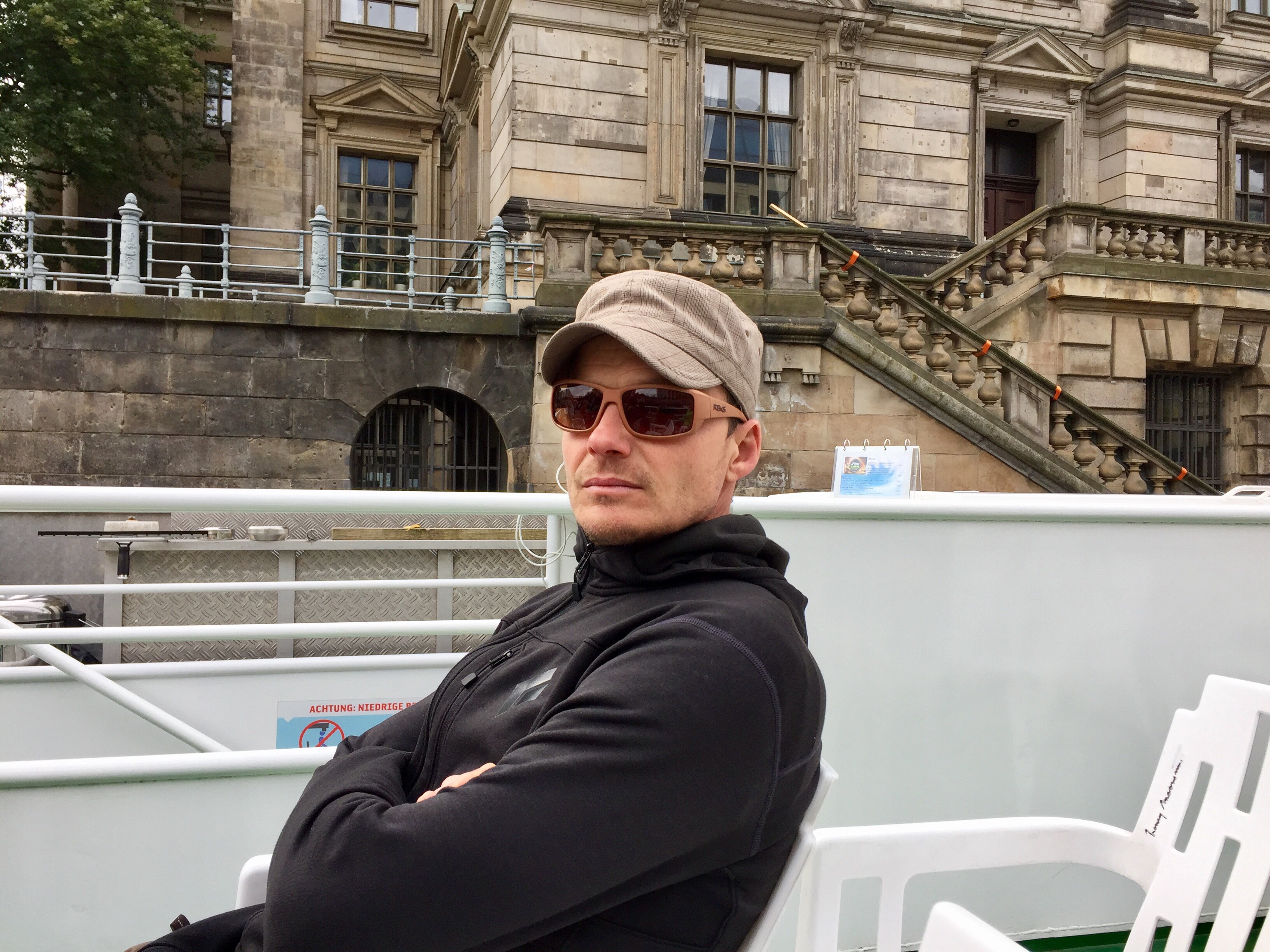 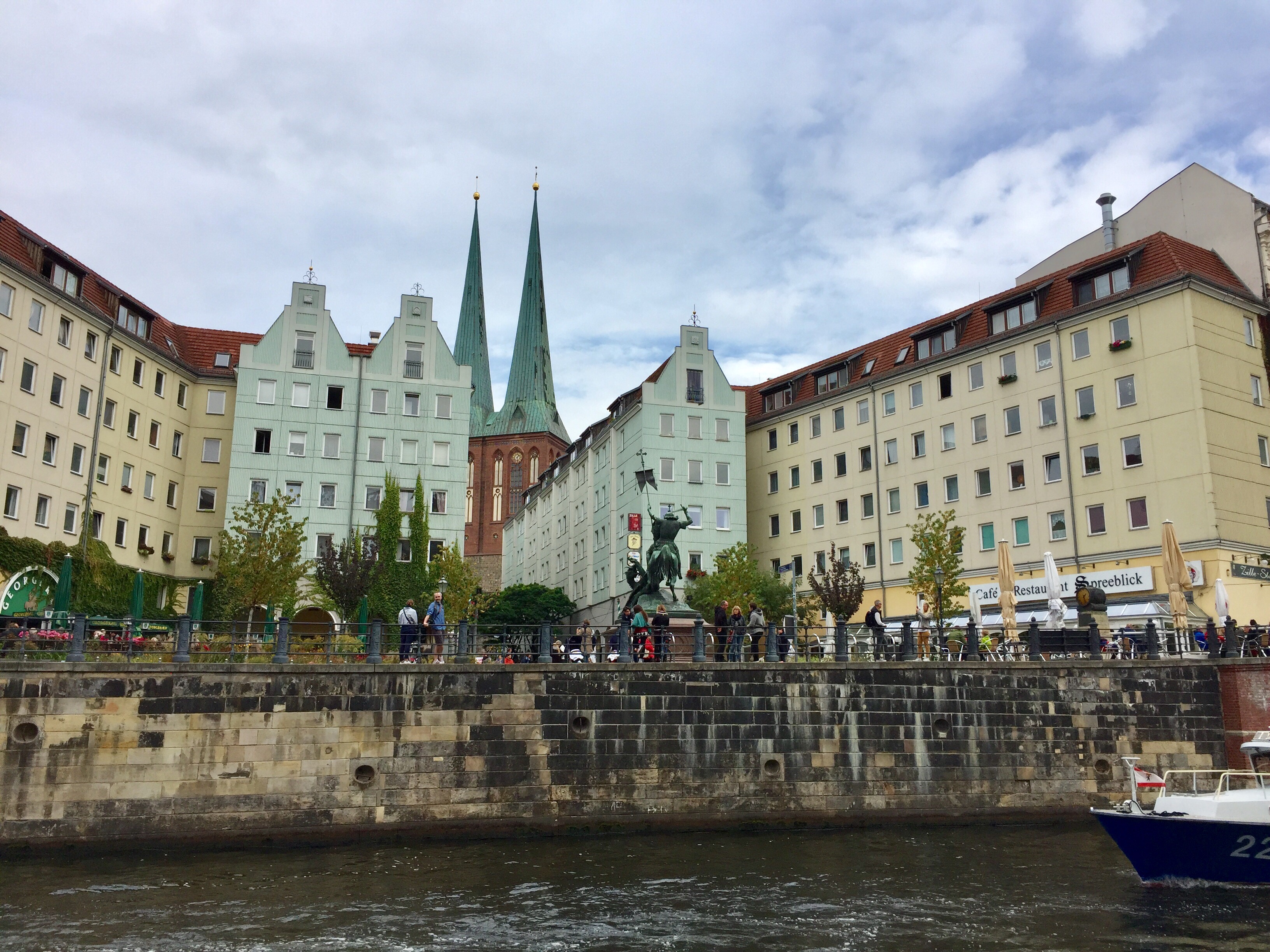 the Nikolai quarter – restored in 1987

this building was given as an American gift to former West Berlin, it’s now the house of world cultures

We made a visit to the Reichstag Building. It was rebuilt in the 1990’s following the reunification of Germany and the decision to move the capital from Bonn back to Berlin. The glass dome was added to symbolize that the people are above the government, as was not the case during National Socialism. From the glass dome, people can view the government at work. A symbol of transparency.

inside the glass dome

listening to the audio guide

view into the parliament below

In the heart of the city is a large park called Tiergarten (seen behind me in this next photo). In the aftermath of the war, the trees that survived the bombings were all cut down for firewood. The trees have since been replanted and the area has been restored as a park.

Our last night in Berlin, we went out to dinner with friends at nice little spot called Das Meisterstück (thank you Carrie Wallace for the recommendation).

It was only fitting that walking that night we came across the markings from the marathon course. The night was a nice end to our time in Berlin.