The day after the Berlin Marathon, we headed down to Munich. It seemed like a must as we would be there during the annual Oktoberfest festival. We arrived in Munich in the late afternoon, and met Jay and Michelle at Cafe Glockenspiel for dinner. The restaurant has really nice views as it overlooks Marienplatz, the city center.

view of the Marienplatz from the restaurant

After dinner, we got a great shot in front of the New Town Hall (photo credit: Jay Coon). 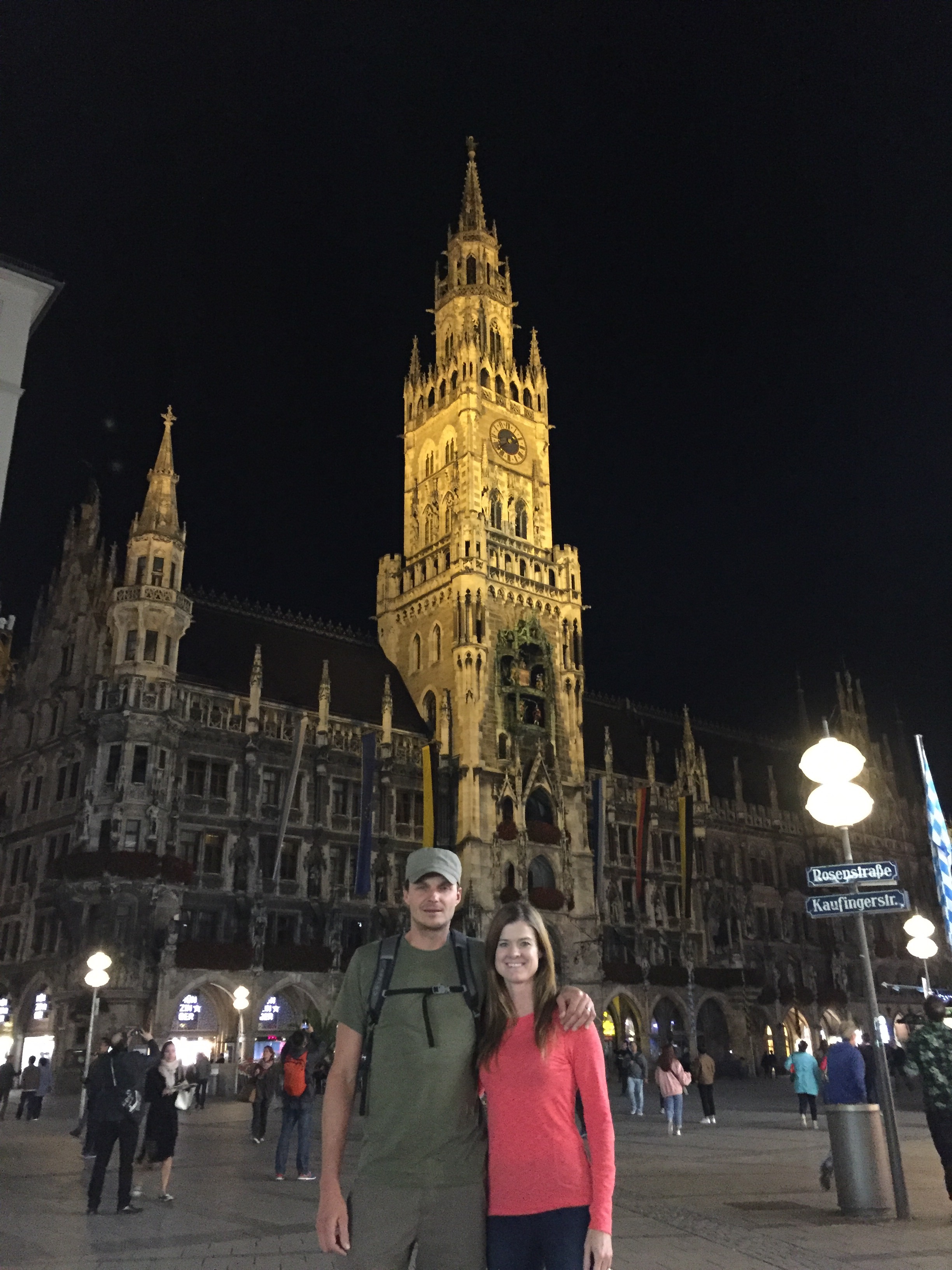 The next morning, we did a bike tour of Munich through Mike’s Bike Tours. We met at the Old Town Hall, which is now a Toy Museum. 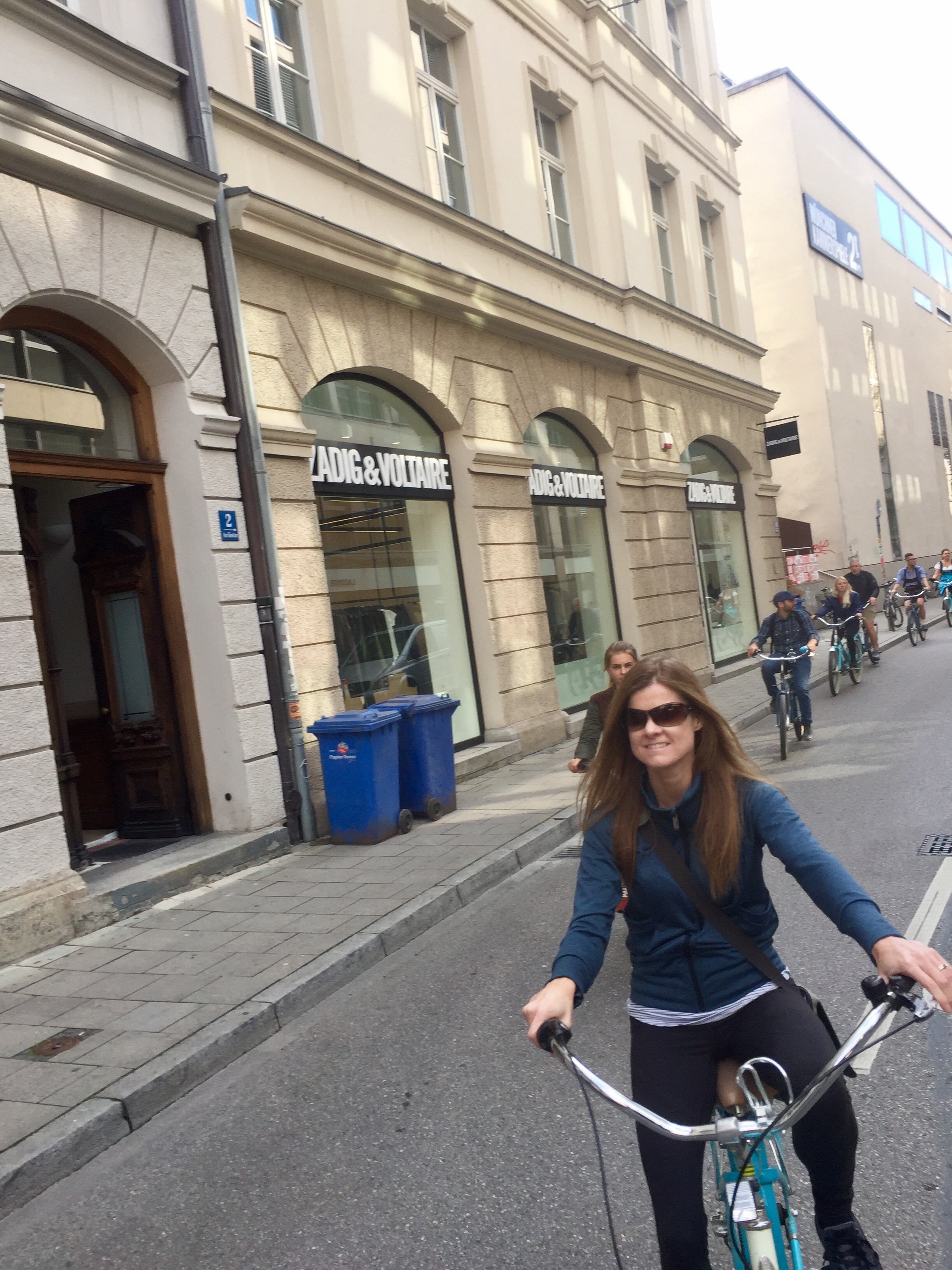 Our first stop on the bike tour was the Opera House and Residence Palace.

Our second stop was Odeonsplatz, where we saw the Feldherrnhalle and the Theatine Church.

Our favorite part of the tour was riding bikes through Englischer Garten, a beautiful public park in the center of Munich. If we’d had more time, I would have rented bikes for a whole day and spent more time in this expansive park. 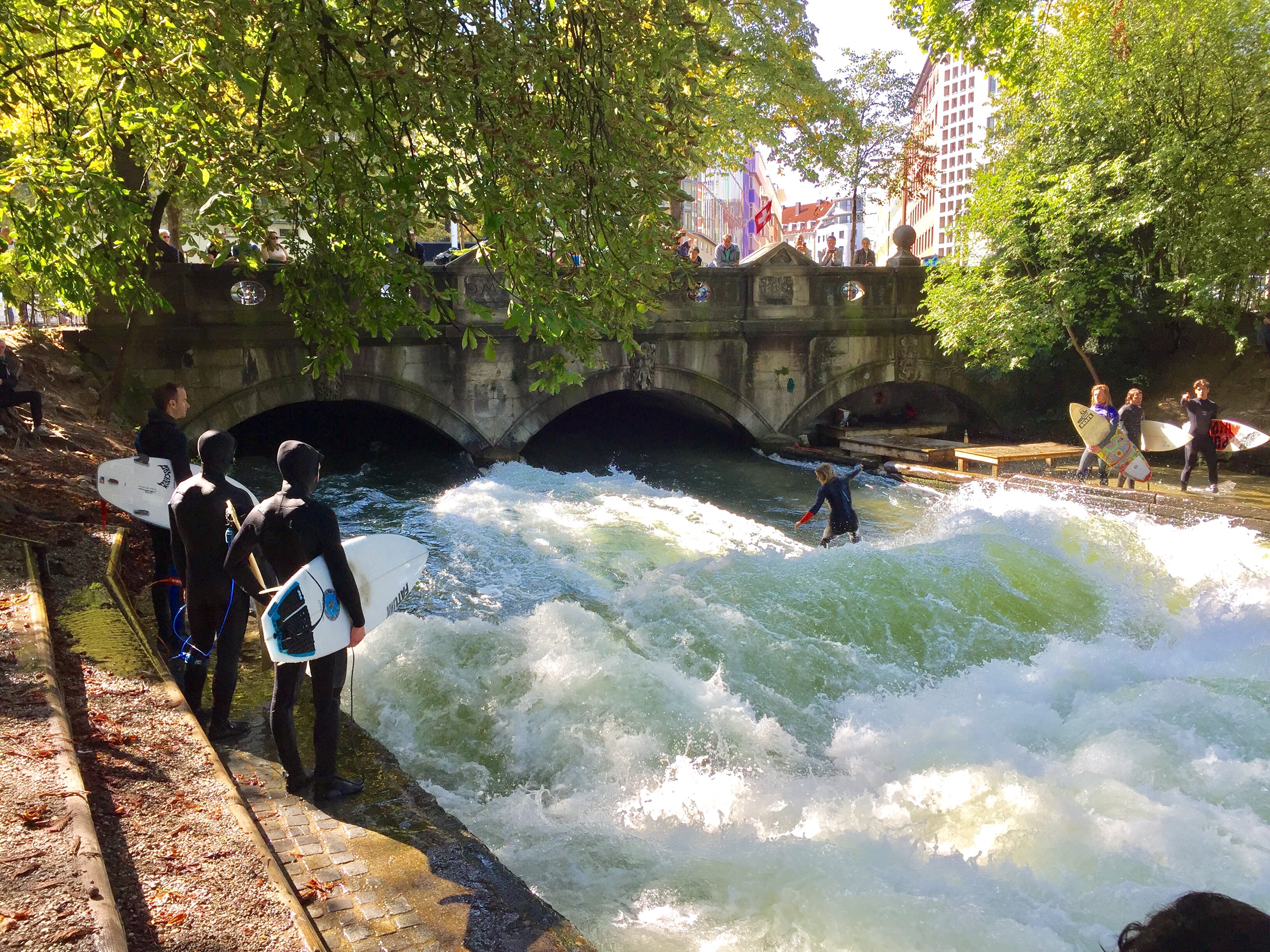 We stopped and spent some time at the Chinesischer Turm beer garden, which is the second largest beer garden in world. It seats 7,500 people and is open year-round. In December, the outdoor tables are replaced by Christmas Market booths. 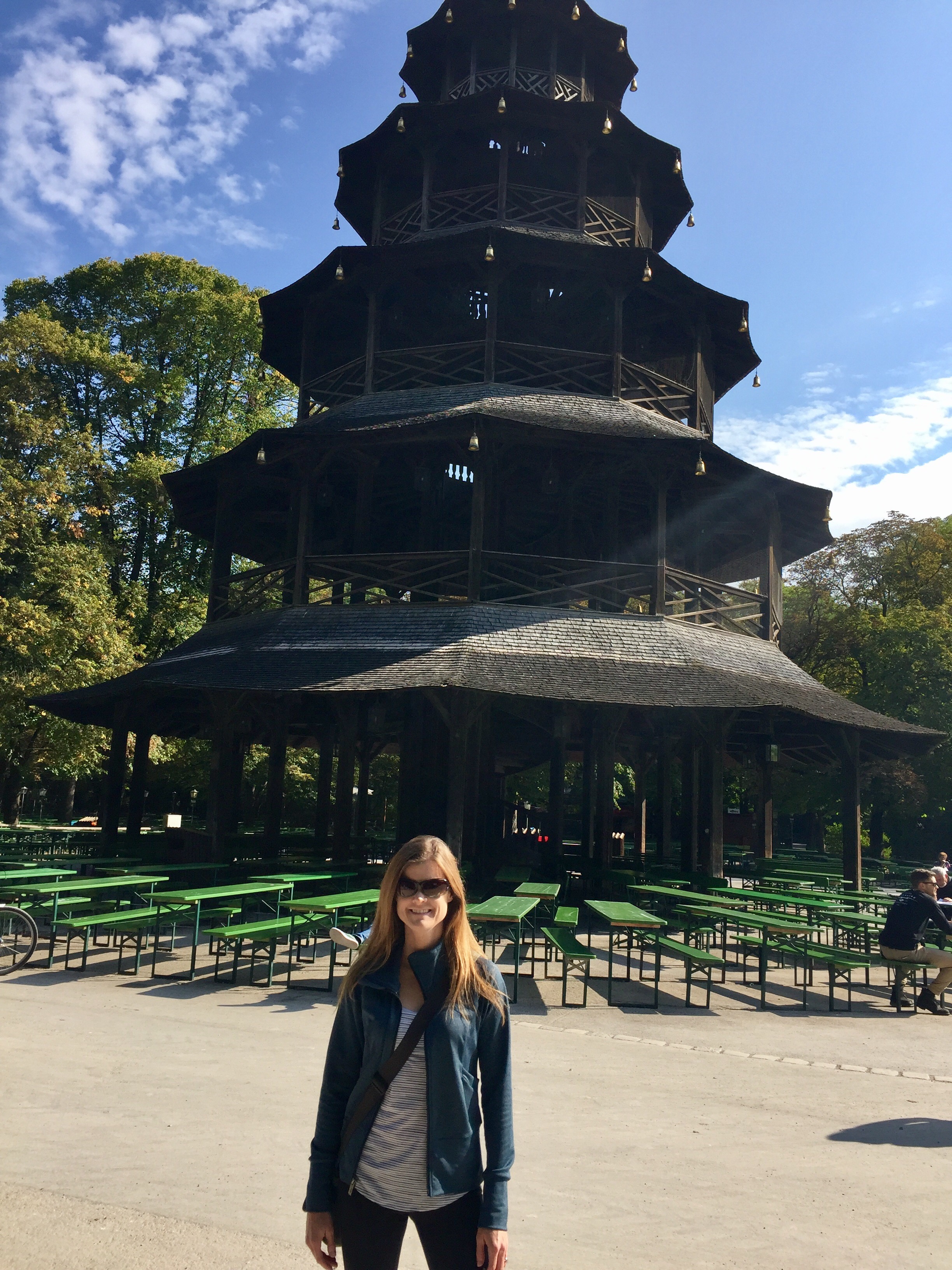 It was a picture perfect day. We were there around 11:00AM on a Tuesday and there were already a lot of people there enjoying beer, sausages, and pretzels. As we were sitting there, two men in business suits sat down at the table next to us, pulled out their laptops, and conducted business over beers. I wondered if this was typical in Munich. 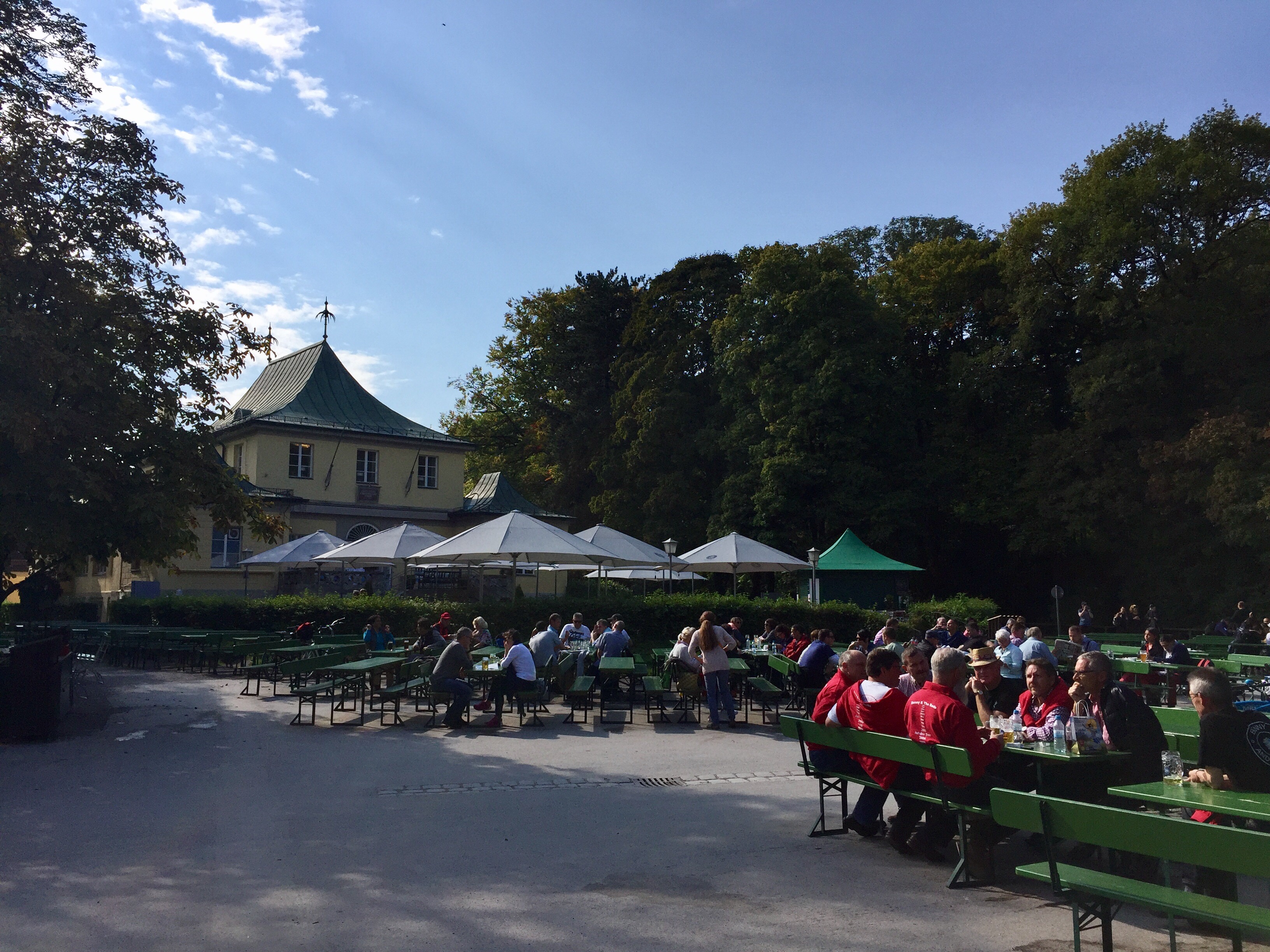 After the bike tour, we checked out Viktualienmarkt, a market with lots of food and fresh flowers. 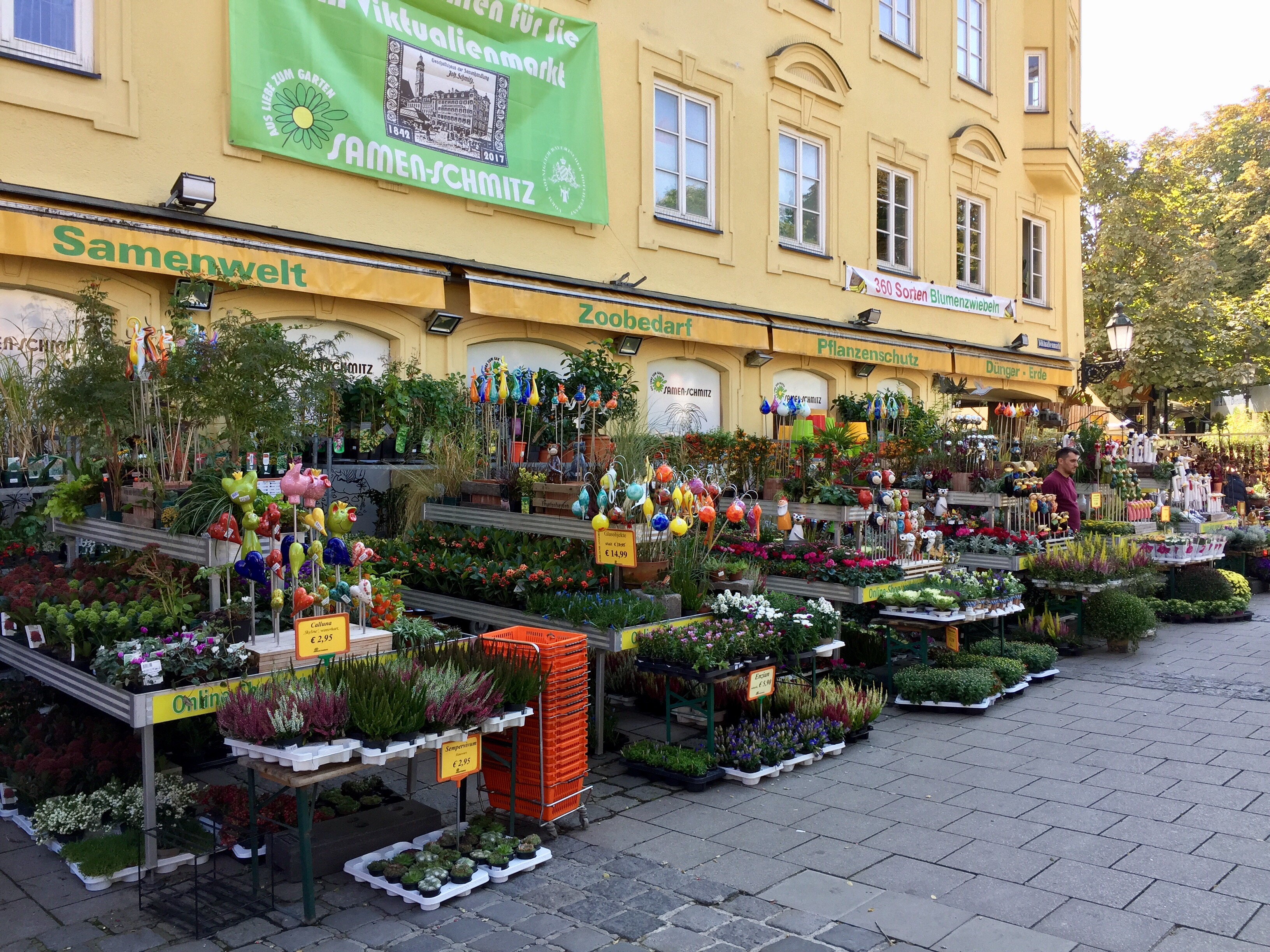 Next, we headed to Oktoberfest. Security was high in the area, even the nearby subway stops had lots of security personnel. At the entrance to Oktoberfest, there was security screening. There is no fee or ticket required to enter Oktoberfest. You pay for carnival rides individually, and at the beer tents, you pay for whatever food and drinks you order. It is possible to pay to reserve tables at the beer tents and people tend to do so if they have a group. We arrived at a beer tent around 2:30 in the afternoon and there were still plenty of unreserved spots available for seating. We had heard that if you were there on a weekday and arrived by early afternoon, you shouldn’t have a problem finding a spot, and that held true for us. As the day went on, things got more crowded.

our first time inside a beer tent 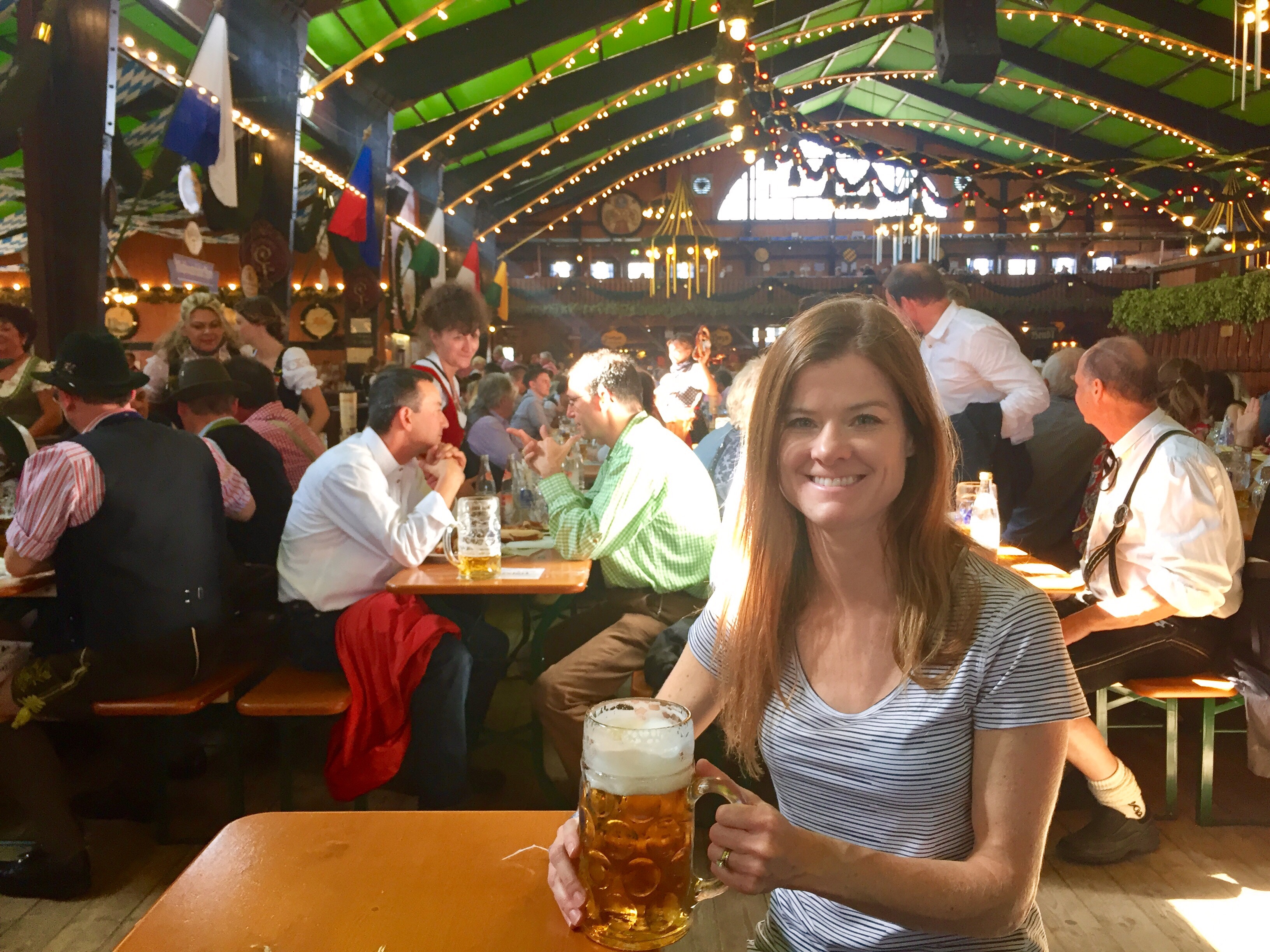 pretzels the size of your head

a supersized beer and pretzel…this is just how they come

Each beer tent has a live band playing. When we were there, all of the bands were playing traditional folk music, all in German. We could tell which songs were popular as everyone would start singing along and then toast at the end, “Probst”…German for “Cheers”. 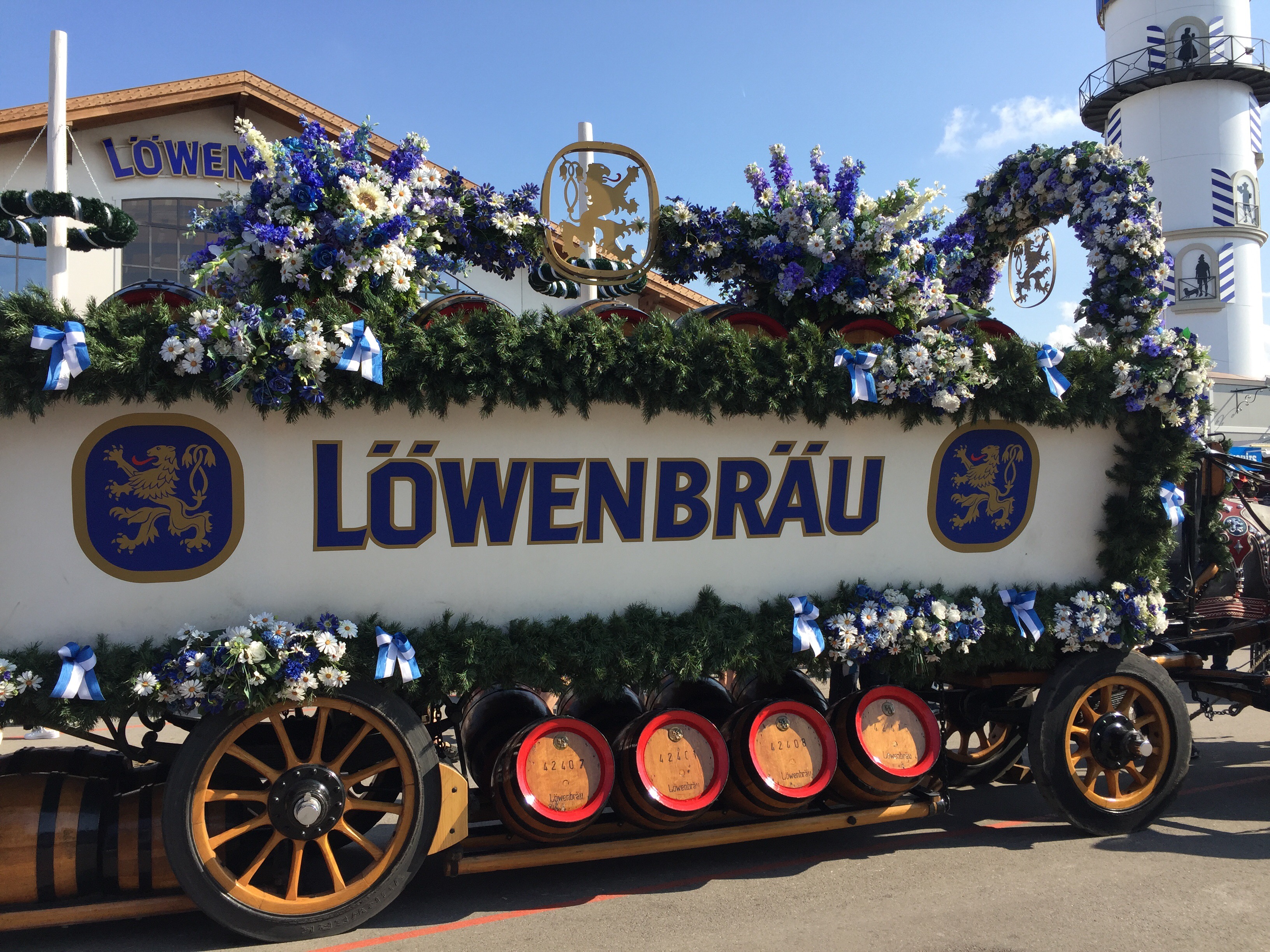 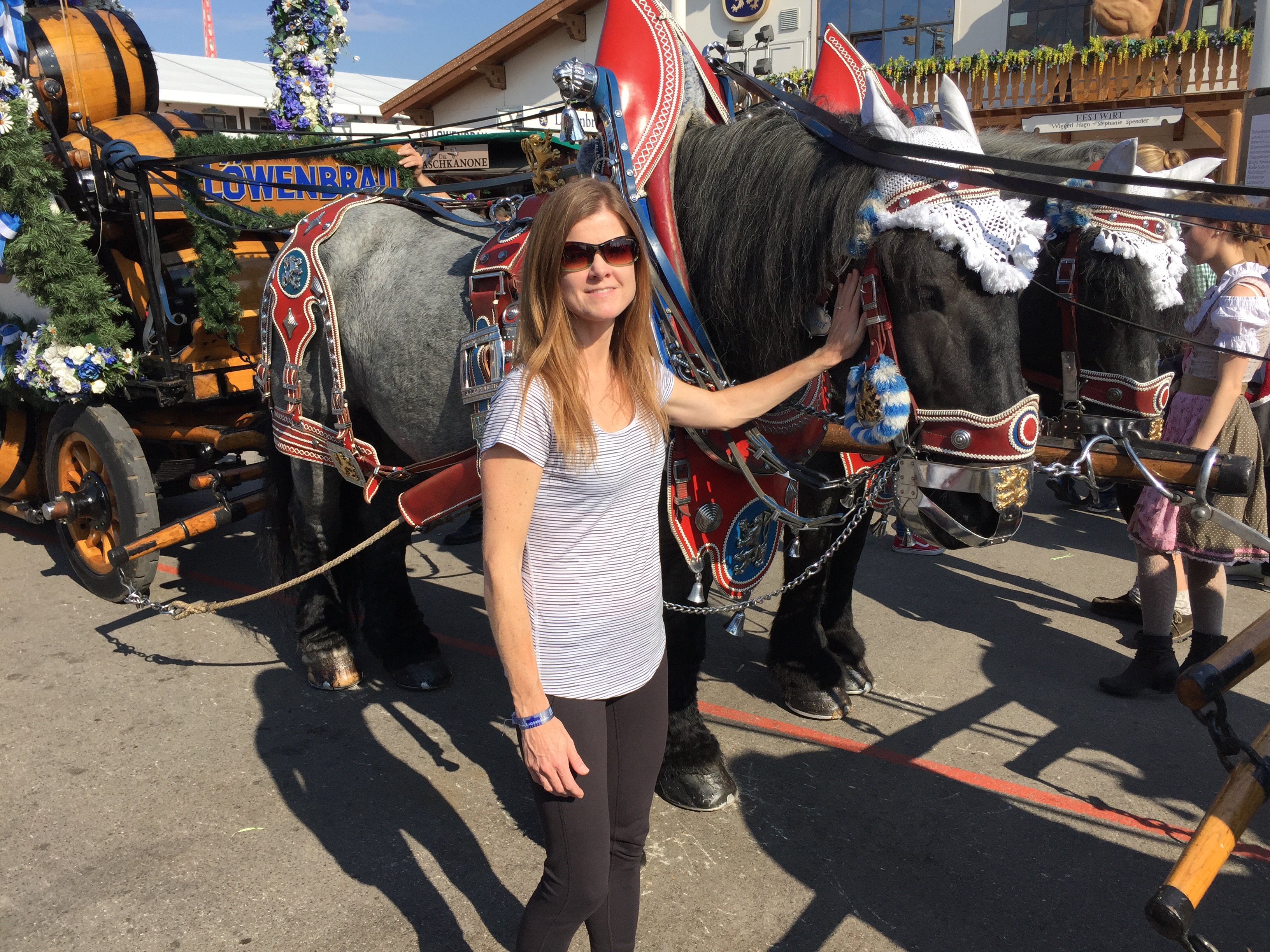 We had heard that when toasting, people will cling glasses so hard that they break the glass mugs. Didn’t happen to us. I think we were there early enough in the day that things were more tame.

I was surprised to see just how many people were dressed in the traditional Bavarian outfits. It would have been fun to dress up; however, the outfits are quite expensive and wasn’t worth it to us since we would only be there for one day.

During a typical year, Oktoberfest is 16 days. This year it is 18 days. There are two extra days this year because Reunification Day falls on a Tuesday, so instead of it ending on Sunday, October 1, they extend it though the holiday. 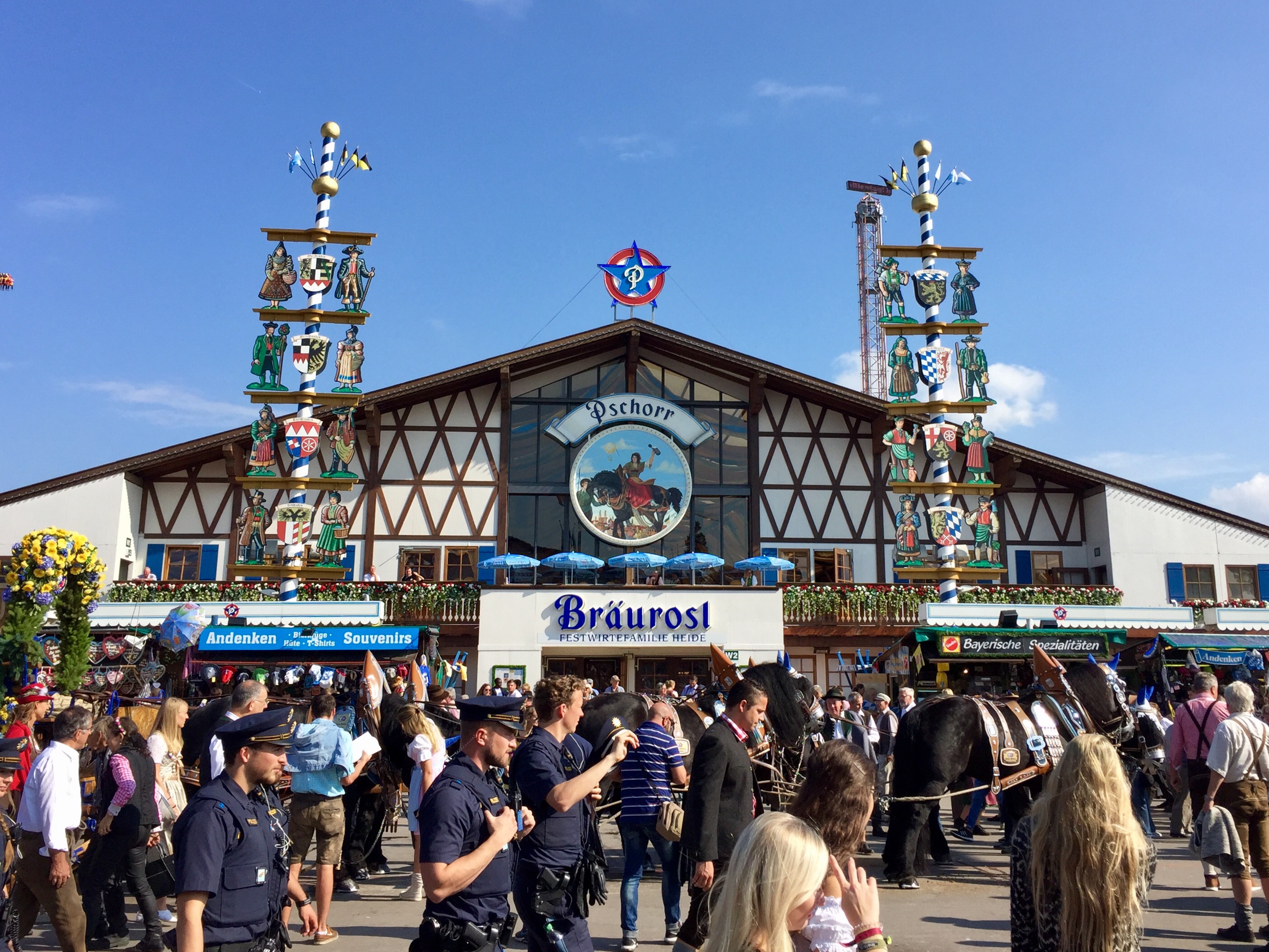 As you walk around Oktoberfest, the smell of candied nuts permeates in the air. We got a bag with a mixed variety of all the different kinds. Yum! 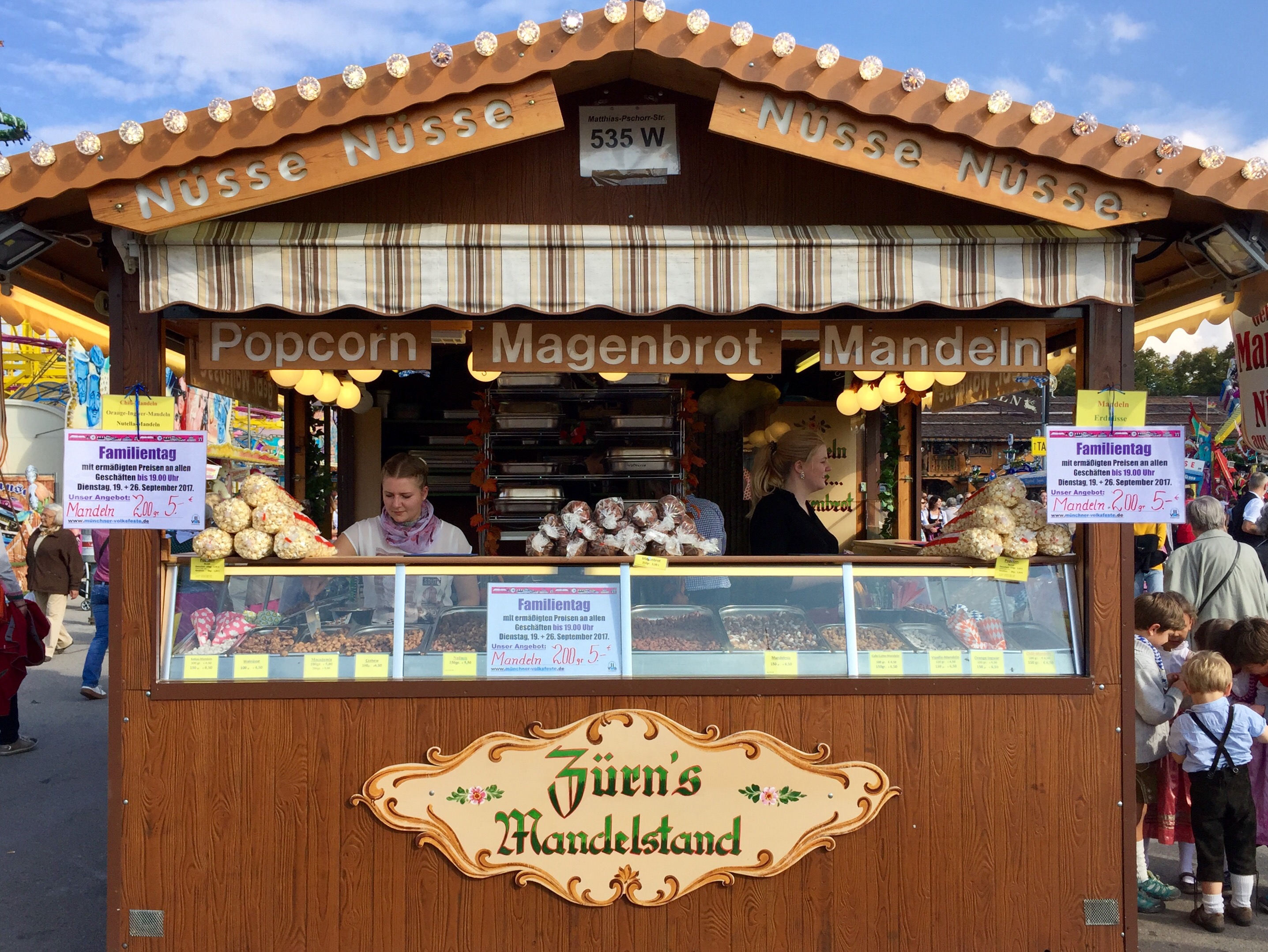 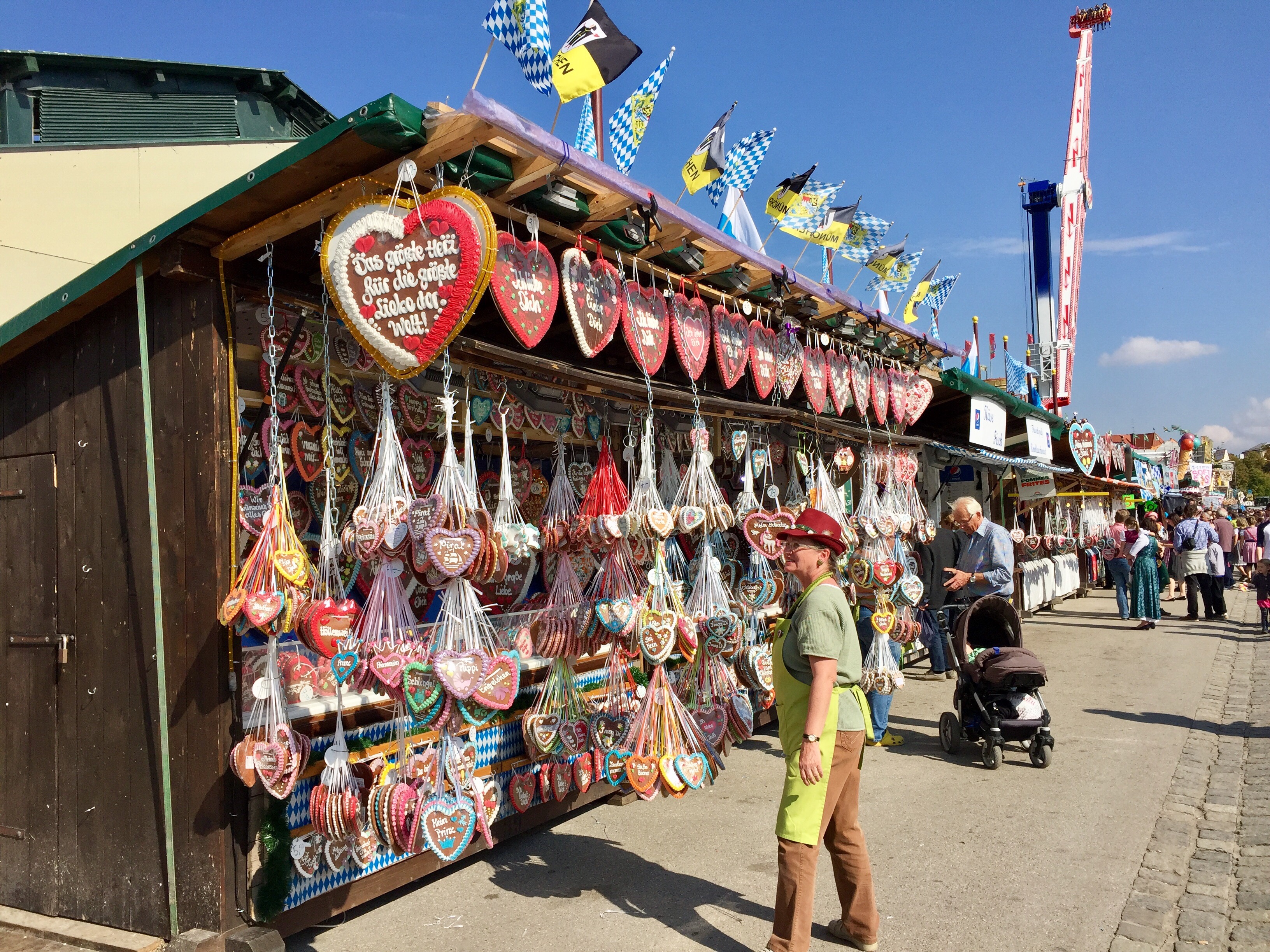 We rode the infamous Oktoberfest Ferris wheel. It was nice to get above the crowds and have the vantage point of seeing the entire festival grounds from up above. 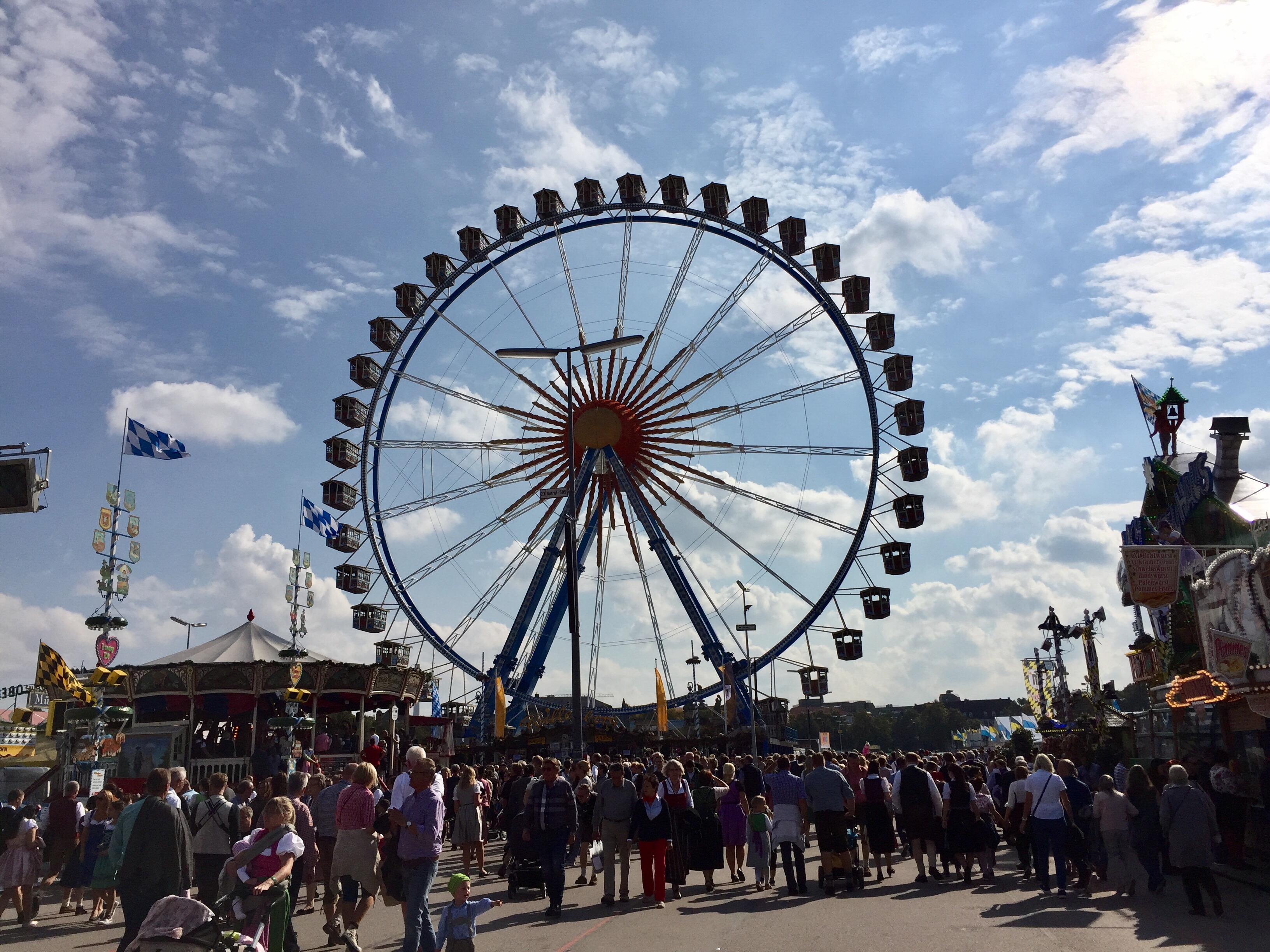 views from the ferris wheel 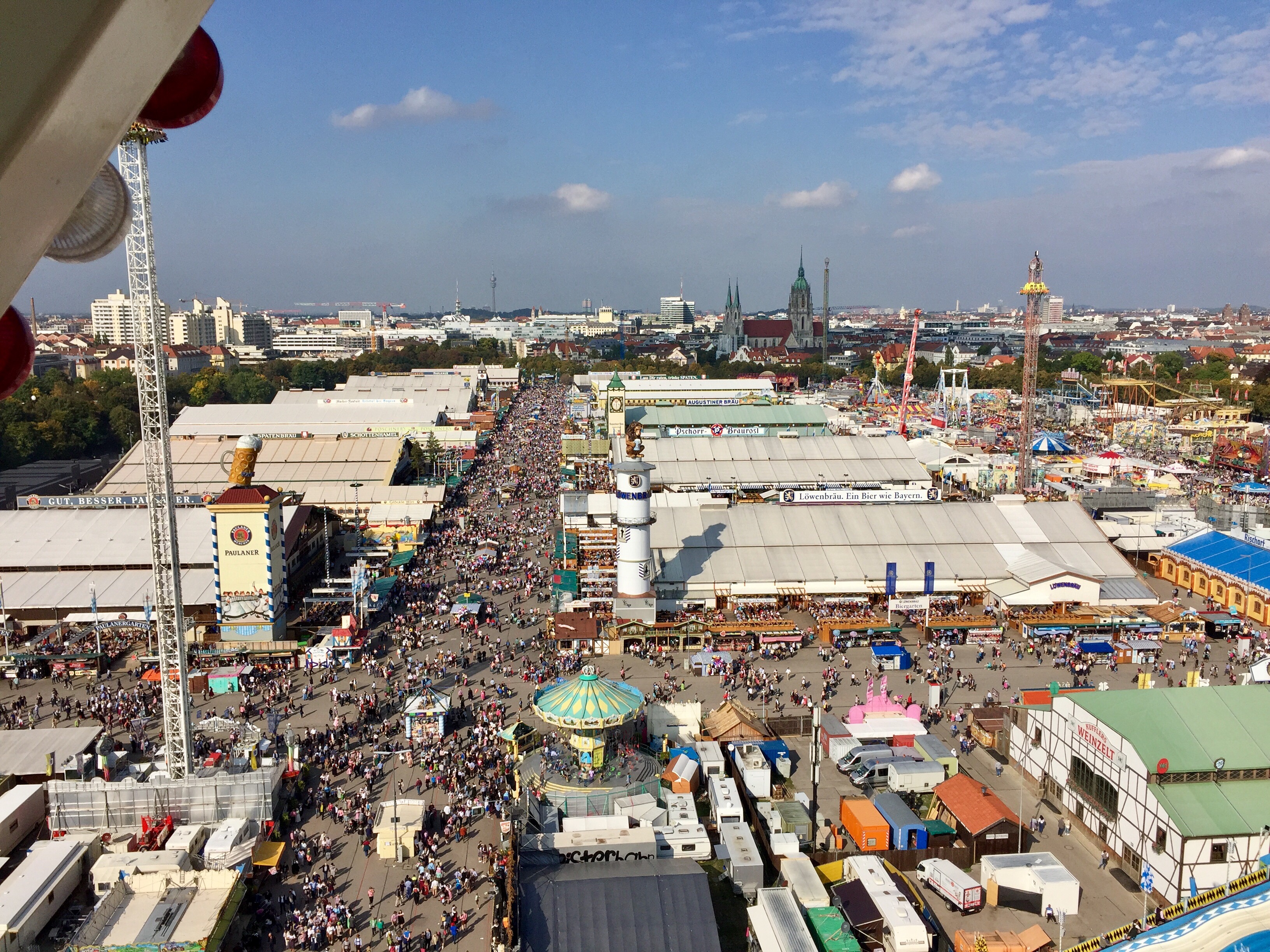 all of large white roofs are different beer tents

Check Oktoberfest off the bucket list. Now off to Switzerland!

7 responses to “Munich and Oktoberfest”